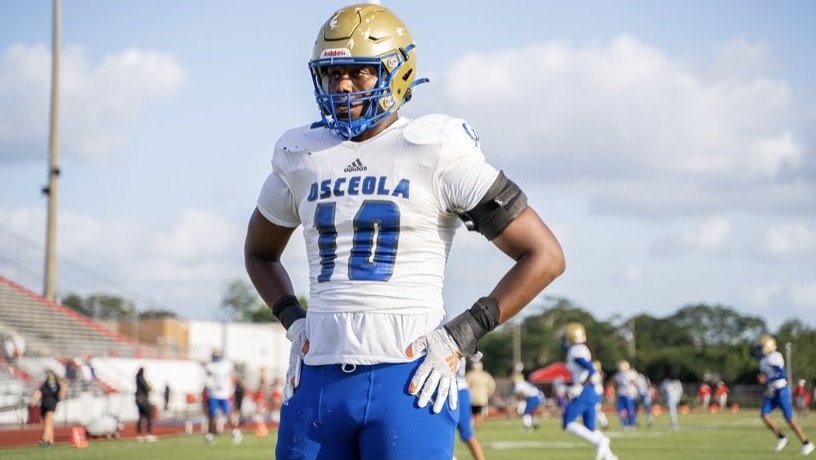 First-year head coach Eric Pinellas has quite the challenge ahead of him. That would be replacing the previous coach Doug Nichols, who had an incredible 11 seasons coaching the Osceola Kowboys, going 105-26 in his time with the team. In the 2020 season coach Nichols and the Kowboys went 9-3 and went all the way to the state championship before losing to Sanford 38-10.

However, the future’s looking bright in Kissimmee, Florida. The Kowboys, with a talented 2022 class along with a loaded 2023 class, look to make another deep run in the playoffs and finish the job this time. If head coach Pinellas can get into his coaching groove early and often this upcoming fall, then the Kowboys have a fantastic opportunity to do something that their program hasn’t accomplished since 1998.

During the 2020 season, the Kowboy offense was efficient as they averaged 28.4 points per game as well as 300.8 total yards per game. They were also balanced, averaging 131.8 passing yards a game to go along with 14 passing touchdowns on the year, and 169.1 rushing yards with 21 rushing scores.

At quarterback, the Kowboys are led by 2022 Chad Mascoe II (6’1” 202 pounds) who threw for 1,438 yards and 12 touchdowns as well as rushing for 209 yards and a touchdown last season. Mascoe has a quick release to go along with an accurate deep ball. He also makes good pre-snap reads, allowing him to get rid of the ball sooner. He has 12 offers at the moment, including  Georgia, Florida, and Florida State.

Pounding the rock for the 2021 version of Osceola will be Ja’Randy Swint (5’9” 175 pounds) who during the 2020 season had a very productive season in which he rushed for 894 yards and 9 touchdowns on 134 carries. Swint is a hard runner who refuses to be arm tackled.

The receiving core will have to make big-time plays for this offense again this year, with their core returning in 2023 Jakeem Jackson (6’1” 173 pounds) and 2023 Izaiah Jean-Baptiste (5’8” 170 pounds). Jackson, who has a Florida Atlantic offer, had 15 catches for 286 yards and 5 touchdowns in 2020. He’s a big-time playmaker when the ball is in the air and will moss whoever is playing corner. Jean-Baptiste can make all the tough catches in traffic and last year had 36 catches for 409 yards and 4 touchdowns.

The offensive line will be feeling the absence of Delfin Castillo (Vanderbilt), however, look for 2023 Jimarion McCrimon (6’4” 240 pounds) to fill that void nicely as he started at right tackle last year and did a solid job.

If Mascoe can have an explosive year through the air for the Kowboys, then expect this offense to light up scoreboards around the state of Florida.

The Osceola defense had an outstanding 2020 season, in which they shut out 3 opponents and held another 4 opponents to 7 points or less. They gave up an average of 13 points per game and caused a total of 25 turnovers. 12 of those turnovers were interceptions while the other 13 were fumble recoveries. The Kowboy defense also averaged 4.6 sacks per game.

The defensive line is young and loaded with Division 1 talent. They will be led by 4-star 2023 star defensive end Derrick Leblanc (6’5” 240 pounds), 2023 4-star defensive tackle John Walker (6’3” 275 pounds), and 2023 defensive end Anthony Famularo (6’1” 225 pounds). Leblanc has a massive frame and if any mistake is made on the defensive front he can easily make up for it with his athletic ability. Last year he had 58 tackles, 8 sacks, and a forced fumble. Leblanc had 44 offers, including Alabama and Tennessee. Walker is an absolute terror for interior offensive linemen. With his incredible strength, good feet, and strong-arm technique it allows him to bully linemen back into the ball carrier. Last year he had 75 tackles, 15 sacks, and 3 fumble recoveries and even returned one of those fumble recoveries for a touchdown. He has 20 offers including Alabama, Florida, and Miami. Famularo has great technique and flies to the football, leading him to 47 tackles, 4 sacks, and a forced fumble.

Obviously, with a great defensive line, it makes everyone else’s job easier in the back seven. The secondary still has a lot of talent themselves, though. 2022 3-star safety Jeremiah Wilson (6’0” 170 pounds) is a great player that will make life easy for his first-year coach. He takes great angles on the ball carrier and makes plays. He also breaks really well on the ball while it’s still in the air. During the 2020 season, he had 47 tackles, 5 interceptions, 2 fumble recoveries, and 2 caused fumbles. He currently has 13 offers from schools including Arizona, Appalachian State, and Coastal Carolina. Wilson will be joined in the secondary by defensive backs 2023 Bo Mascoe (5’11” 162 pounds) and 2022 Kaylon Walters (6’0” 180 pounds). Mascoe has a Florida Atlantic offer and had 15 tackles to go with 2 interceptions last year for the Kowboys. He is extremely fast and good at high-pointing the football. He even returned a blocked field goal for a touchdown last year. Walters is another solid player who had 55 tackles, a sack, and 3 interceptions.

The linebacking core will be led by 2022 Lamont Lee (6’1” 205 pounds) who is an outside linebacker and has a Florida International offer. Lee had 72 tackles, 2 sacks, 2 caused fumbles, and 2 interceptions in which he returned one back for a touchdown. Lee has good football instincts as well as being a good tackler.

Look for this defense to have another great year building off of what they were able to do last year, and lead the way for the Kowboy team.

Osceola will begin their season on August 20th when they play Lake Nona on the road. Their schedule also features a tough game against Cocoa (10-1) on the road on September 3rd.

If the defense can elevate their game to another level led by their incredible defensive line, and their offense can be productive, then expect a very impressive inaugural season for head coach Eric Pinellas and his Kowboy squad.