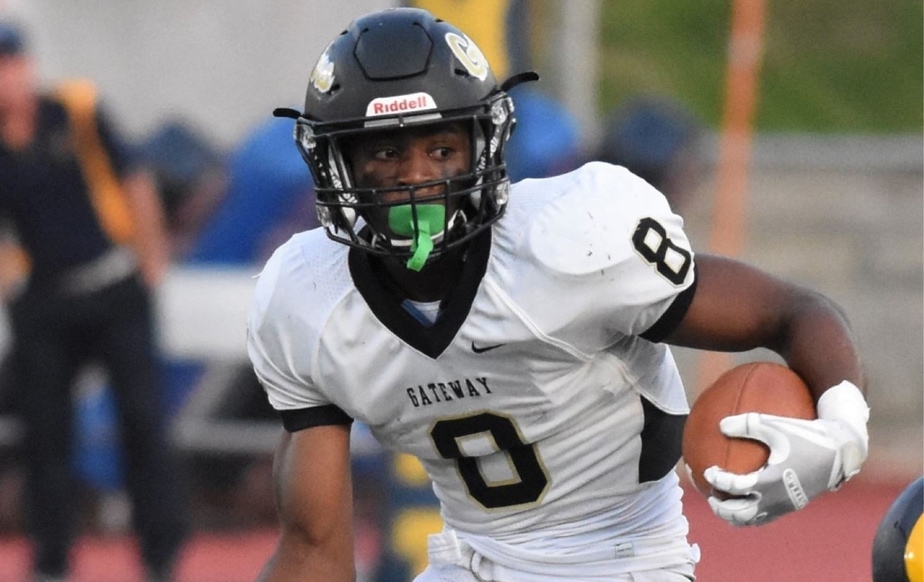 With the game of football continually evolving, the safety position has changed dramatically in recent years. As a safety, having the athleticism to drop back in coverage, but also the size to play inside the box has become increasingly important. Having a safety that can do both allows defensive coordinators to get creative with their play-calling with a player who can essentially line up as a linebacker or in coverage. Derrick Davis Jr. has the build and athleticism to be that kind of player at one of the top programs in the country.

As the #2 safety in the country, Derrick Davis Jr., is a 4-star prospect out of Monroeville, Pennsylvania. Davis Jr. currently attends Gateway High School, where he has just begun his senior season.

In high school, Davis Jr. plays all over the field, but mainly he lines up as a defensive back or running back. At 6’1, 196 pounds, Davis Jr. projects to play safety at the next level and has received offers from many of the top programs in the country to do so. Davis Jr. has received 25 offers but recently trimmed his list down to 7, with the schools being: Georgia, LSU, Ohio State, Clemson, USC, Pitt, and Penn State. The experts seem to have concluded that Davis Jr. is leaning towards Penn State, but he is yet to make a decision.

As a prospect, Derrick Davis Jr. is one of the best you can find at the safety position. National media outlets grade him as a .the #2 safety in the country and the #4 player from Pennsylvania. His EFN Player Rating is 96.

At the Opening Regional in 2019, Davis Jr. ran a 4.64 40 yard dash, a 4.14 20 yard shuttle, and jumped for a vertical of 35.1 inches, displaying the athleticism that makes him an elite prospect. Not only is he a great athlete, but this guy is the real deal on the football field. Watching the tape, Davis Jr. can make a big play every time he’s out there. Whether he’s forcing fumbles, jumping routes for an interception, or laying someone out, it seems that he can change the game almost every play. He is an extremely versatile player as he can play man coverage, but also can line up in the box and blitz the QB. You will also often see him playing the ballhawk role as a free safety.

In 2019, Derrick Davis Jr. led the Gateway Gators to a 12-3 record, winning the WPIAL Class 5A title for the second time in his high school career. Before losing to Arch-Bishop Wood, the Gators also managed a semifinals berth in the PIAA Class 5A state championship. Davis Jr. led the Gators with 1,527 rushing yards and 547 yards through the air. He also managed to put the ball in the end zone 28 times. The Gators defense, anchored by Davis Jr., was dominant during a season that included 4 shutout victories.

To start the 2020 season, Davis Jr. and the Gators beat Franklin Regional 41-7, with Davis Jr. averaging over 10 yards per carry, rushing for 124 yards and a score. Along with that, Davis Jr. helped lead a stellar defense holding Franklin Regional to just one score. The 1-0 Gators will be gearing up for their next game on September 25th, where they will face Pine-Richland. After the 2020 season, Davis Jr. is planning to participate in the 2021 Under Armour All-American Game, which features many of the country’s top college recruits.

For whatever program Derrick Davis Jr. ends up choosing, they will be getting a top-end athlete with the potential to be an elite safety at the highest level. The name of the game at the safety position is versatility, and he will provide just that. Do not be surprised to see Davis Jr. as the eventual defensive leader of one of the country’s top programs, and potentially a future NFL talent.