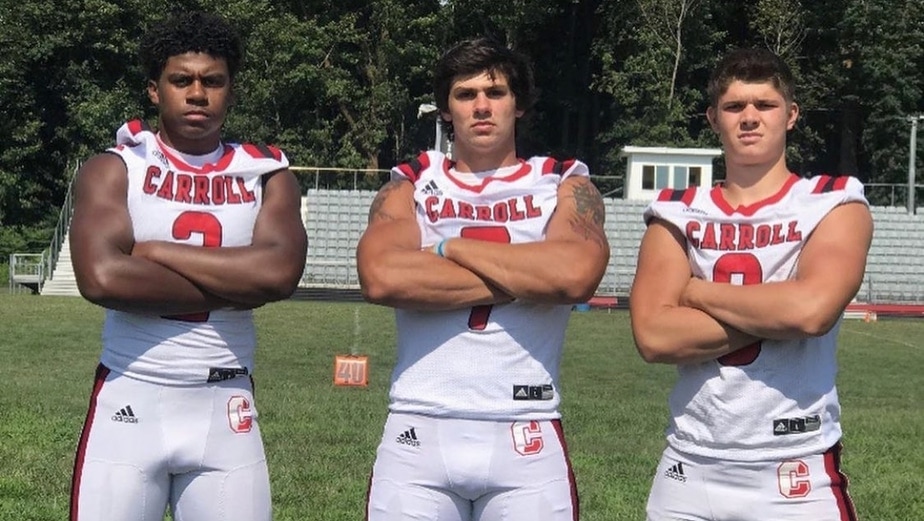 While Archbishop Carroll has been slowly improving over the past few seasons, 2018 was another difficult year. After starting off 2-0, the Patriots finished 5-7 in 2018, including a 2-6 record in conference, which tied for 5th. Carroll’s defense was solid, only giving up 22 points per game, however, the offense could only muster 25 points a game, which made things difficult against better competition.

2019 will be just the second season for Kyle Detweiler as head coach at Archbishop Carroll. Before becoming the head man for the Patriots, Detweiler was the defensive coordinator for Central Bucks South for six seasons. In his final two seasons, they switched to a 4-2-5 scheme that gave Central Bucks South one of the best defenses in the conference, allowing only 17 points per game. Detweiler took over for Dan Connor, who stepped down as Carroll’s coach after just two seasons.

Carroll will lose a few productive pieces on offense in 2019, beginning with running back Joshua Bowman. At just 5-2, 145 lbs, Bowman may not look like he would be a productive runner, but he had a very solid 2018 campaign. Bowman was 2nd on the team with 505 yards, averaging more than 6.5 yards per carry, and 4 touchdowns.

Perhaps the biggest loss for the Patriots on offense is wide receiver Koran Butler (Lackawanna College), who was by far the top target in 2018. Butler hauled in 28 passes for 628 yards and 10 touchdowns, all three of which led the team by a wide margin.

Defensively,  LB Shawn Johnson will be tough to replace for Carroll. Johnson was all over the place in 2018, finishing 2nd on the team with 76 tackles, and 1st with a very impressive 22 tackles for loss. Defensive end John Bushner made things difficult on opposing defenses all season, leading the team with 3.5 sacks, while also adding an additional 4.5 tackles for loss.

Carroll is returning some impact players on offense, starting with quarterback Russell Minor-Shaw (6’0 230). As a dual-threat, Minor-Shaw threw for 1,051 yards and 18 touchdowns, while also finishing 4th on the team in rushing with 378 yards.

He will return along with Brennan Robinson (5’9 180), the team’s leading rusher from a year ago with 554 yards. He is an underrated talent in the 2021 recruiting class. Robinson will split some time with Jahlil Warren (5’7 170), who is another solid rusher and will give the Patriots a solid 1-2 punch in the run game.

On the outside, wide receivers Mike Dempsey and Billy Coppock will pick up the slack for Koran Butler, their main receiving threat from a year ago. Tight end Darryl Simpson Jr (6’3 200) is a big body and red-zone target, while also being a solid blocker. Christian Thomas (6’3 185) will be another option in the passing game.

Jason Lafontano and Jamil Thomas are two starters back that will anchor the offensive line. Outside of these two, they are a young group and lack experience.

When talking about the Patriots’ defense, the conversation starts with linebacker Richie Kimmel (6’1 220). The class of 2020 prospect more than doubled the next highest tackle total on the team with 166. In fact, Kimmel had more solo tackles than anyone else had total tackles. Kimmel also added 18 tackles for loss, a fumble recovery for a touchdown, 2 forced fumbles, and 2 picks, making him the best player on that side of the ball for the Patriots. Unfortunately for the rest of the league, he will be back in 2019.

The strength of this defense will definitely be at the second level with the linebackers. Outside of Kimmel, the Patriots have Matteo Santoleri (6’2 218) and Tyler Alston (6’2 225). All 3 are strong, aggressive, and are the captains of this year’s football team.

Malachi Hansen is a 5’9 corner who can shut down the opposing team’s top receiver. Another player to watch is defensive tackle, Jamil Thomas (5’11 255). He is ready to have a breakout season for the Patriots and will be a force in the middle of the defensive line. Keenan Fortenberry (6’0 200) should see a lot of playing time and contribute on defense.

Kyle Detweiler has made some huge improvements over the last two seasons and his team will continue to rise up the ladder in 2019. Russell Minor-Shaw will help guide this offense and is expected to have a big senior season. They have some talented offensive weapons with Dempsey, Robinson, and Sanders.

On defense, Richie Kimmel is a beast in the middle and is a sleeper to watch this season. Alston and Santoleri have a lot of potential at linebacker.

In order for the team to flip flop their 5-7 record from last year, they need to get quality play from the bigs inside on both sides of the ball.

Could this be their season to make the playoffs?