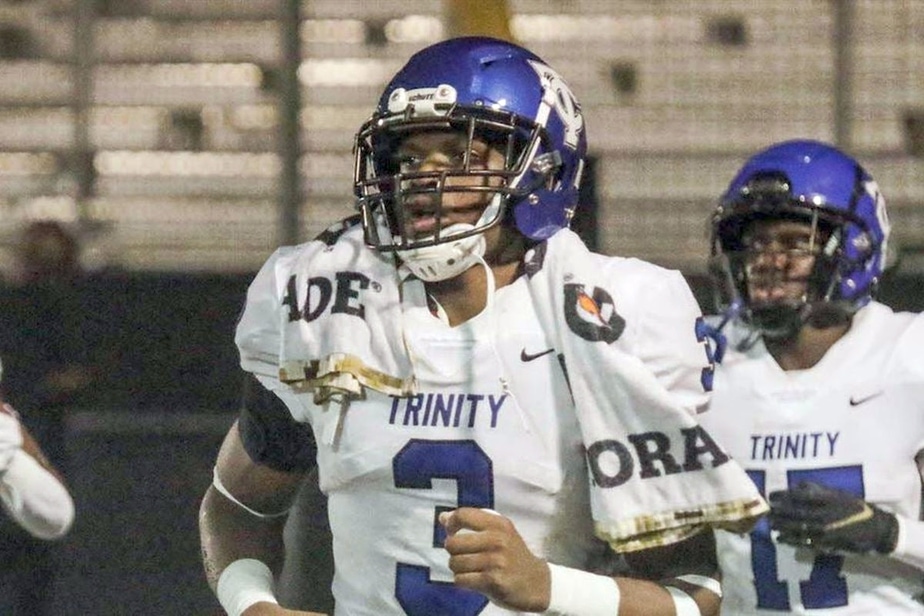 Dorminey and his Conqueror team from 2013-2016 were the kings of Class 3A in the state of Florida, winning 4 straight state championships. During the 2020 season, after a season in which they would go 5-6 in 2019, saw his team return to glory, going 12-1 and winning the Class 3A state championship. That season included an impressive week 5 victory over American Heritage (Class 5A champions) 3-0 and in the state championship a thriller win over Chaminade-Madonna 25-22.

The 2021 version of Trinity Chrisitan Academy will be a much younger team that has a lot of promise. They will have a lot to prove if they want to repeat as Class 3A state champions. However, when you have a future Hall of Fame coach leading the way, you can never count out this Conqueror squad.

Colin Hurley (5’11” 198 pounds) will be leading the way as the signal-caller for the Conqueror’s this upcoming fall. Hurley is a freshman but actually got snaps for the team last year as an 8th grader. Hurley will have big shoes to replace as  Ja’Cory Jordan (Florida A&M) who accounted for 5,228 yards passing and 52 touchdowns over his 3-year tenure as the starting quarterback at Trinity Christian Academy has graduated. Hurley has the potential to be a very special player, as he already has 3 offers from schools like Florida State, Ole Miss, and Middle Tennessee State.

Starting in the backfield next to Hurley is 2023 running back Treyaun Webb (6’0” 190 pounds) who currently is a 4-star prospect. Webb has 41 offers at the moment, most notably from schools such as Alabama, Ohio State, Florida, and Georgia. In the 2020 season, Webb accounted for 837 yards as well as 12 touchdowns. Look for Webb to give his freshman quarterback Hurley some relief in the run game to help settle the nerves.

The receiver position for the Conquerors is another position where players have a chance to step up big time in new roles. With the losses of 4-star Marcus Burke (Florida) and Kaleb Killian (Air Force), a lot of production and experience has been lost. Look for 2022 Fred Highsmith (6’1” 175 pounds) to have a big year for the Conqueror offense. Highsmith is the most experienced returner in the receiving core, and during the 2020 season had 17 catches for 247 yards and 5 touchdowns. Highsmith will be a big-play receiver and surely will make the 50/50 plays for his freshman signal-caller. Another receiver to watch will be 2022 Xander Ross (5’8” 165 pounds) who is a quick slot receiver that has playmaking ability. In the 2020 season, he had 13 catches for 211 yards and 3 touchdowns.

On the offensive line, it will be hard to replace Florida signee Austin Barber who was a terrific starter at left tackle for the Conquerors. However, they will be led by Michael Trimble (6’2” 270 pounds) who is a senior guard. If you’re a college coach and want to find someone who could be a steal in the 2022 class, please watch Trimble’s film. He decleats defensive tackles every time he has to do a pull block. Not only that, he has that mauler mindset that can simply not be taught. The number of times on film you will watch him pile drive his opponent 10-15 yards down the field is glorious to watch as long as Trimble is on your team.

Even though this offense will be young, look for them to still have an impact on the game led by Webb and Trimble. Also look out for Hurley once he starts finding his rhythm, as he will be one of the better quarterbacks in the 2025 class and this offense will become dangerous.

Defensively in 2020, the Conquerors were dominant and very well-coached. They only gave up 11.8 points per game and averaged 2.7 sacks a game. They also had 11 interceptions to go along with 8 fumble recoveries. Even though this side of the ball will also be losing a lot of production due to graduation, look for them to still be good due to emerging players and a great scheme.

Even with defensive end Bryce Capers transferring to Robert E. Lee High School, look for this defensive line unit to still be solid. They will be led by 2022 Johnathan Goddard Jr. (6’1” 220 pounds) who is technically an outside linebacker but plays more of the stand-up defensive end role. In the 2020 season, he had 43 tackles and 8 sacks, including the game-winning sack in their state championship victory. At defensive tackle, they have Deon Briggs (6’0” 335 pounds) who does a great job at what he’s asked to do. He plugs gaps and makes plays when he has the opportunity. In 2020, he accounted for 38 tackles.

The linebacking core for the Conquerors is losing Lucius Lattimore (Florida A&M) who was the leader of the defense for them last year. They do have Caden Morrell (6’0” 195 pounds) returning who will be a senior linebacker that during the 2020 season had 76 tackles and 6.5 sacks. Morrell has shown good timing on his blitzes and is a smart football player. Morrell will have to have another productive season in order for this defense to be as effective as they were in 2020.

The secondary at Trinity Christian Academy will be losing three talented starters in Corey Coley (Maryland), Terrell Jackson (Air Force), and CJ Ross (USF). However, for all that, they are losing they will be having a whole lot of talent returning as well. At safety, the Conquerors will be led by Christian Ellis (6’1” 190 pounds) who is a senior who also split time at running back. During the 2020 season, Ellis had 43 tackles, and Ellis currently has 8 offers including Air Force, Army, and Coastal Carolina. Leading the secondary alongside Ellis will be 2022 cornerback Harold Stubbs (6’0” 180 pounds) who has great playmaking ability when the ball is in the air and has shown to not be afraid of contact with big hits.

This defense will always be good under coach Dorminey due to their scheme and how well-coached they are, but to be special as they were last year they will need their good players to be great,  and for everyone to do their part in order to be elite.

The Conquerors will open up their season on August 27th against Raines High School (5-7 in 2020). On October 8th, they will have their biggest challenge when they face off against a talented American Heritage squad. If they can manage to win that game, then look for this squad to be the heavy favorites in Class 3A again.

If Hurley can mature quickly while Webb can carry the load offensively and this defense can do their part, then look out for this team to be a major factor in the playoffs. If Hurley as a freshman quarterback can lead his team to back-to-back state championships, then don’t be surprised if we see another run by this Conqueror squad under head coach Verlon Dorminey similar to the one of 2013-2016. Trinity Christian Academy will surely be a team to keep an eye on in the state of Florida.