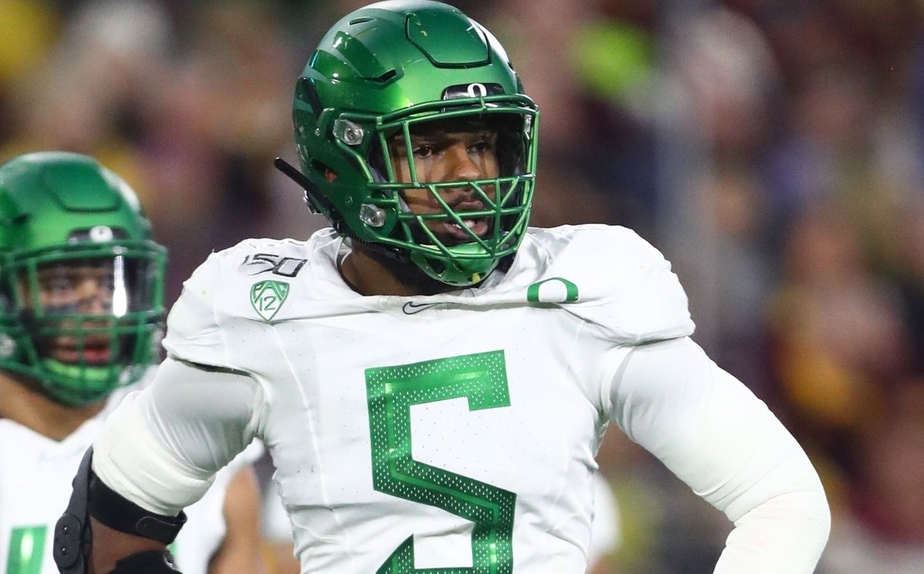 The Oregon Ducks won back-to-back PAC-12 championships with their 31-24 victory over the USC Trojans. Sophomore defensive end, Kayvon Thibodeaux, was the game’s MVP.

The 6’5 250-pound standout had 5 tackles, 1 key sack that resulted in a 9-yard loss, a pass deflection, and hounded USC’s quarterback, Kedon Slovis, all game. He also led a defensive line that held the undefeated Trojans to 38 yards on 26 carries.

“It was a great team effort. We had to fight all the way to the end. We knew it would take that for us to win. It was just another day on the job,” said Thibodeaux.

Over the last 2 weeks, the Duck’s defense has clicked. “Everyone has played for each other. We cut out all the noise and excuses and played with a chip on our shoulders”.

As a result of the pressure by the defense, the Ducks were able to frustrate Slovis. “He is a great passer. I told people on the sideline that he has great pocket presence. I see him doing big things in the future,” said Thibodeaux.

“When Kayvon plays like that he is hard to stop and he can change everything. He is an every-down guy. On first and second down, he is stopping the run, setting edges, and winning stunts and twists. On third down, they have to commit an extra back to him or chip at tight end to him as well. As a 1-on-1 matchup, he is very difficult to block and he is only getting better. I am really proud of him and our defense.”

Last season, Thibodeaux was the PAC-12 Freshman Defensive Player of the Year and a 1st Team USAToday Freshman All-American. He has the Oregon record for the most sacks (9) in their freshman season and tied a PAC-12 record with Nick Perry (USC 2009).

In 2019 against Utah, he broke the PAC-12 championship game record with 2.5 sacks. He comes up big in the most meaningful games and at key points of the game. 7 of his 9 sacks as a freshman came in the 4th quarter.

In high school at Oaks Christian in California, Thibodeaux was the USAToday Defensive Player of the Year and 1st Team All-American. He was the top player in the ESPN 300 and the 6th overall prospect in the country by Rivals and 247 Sports.