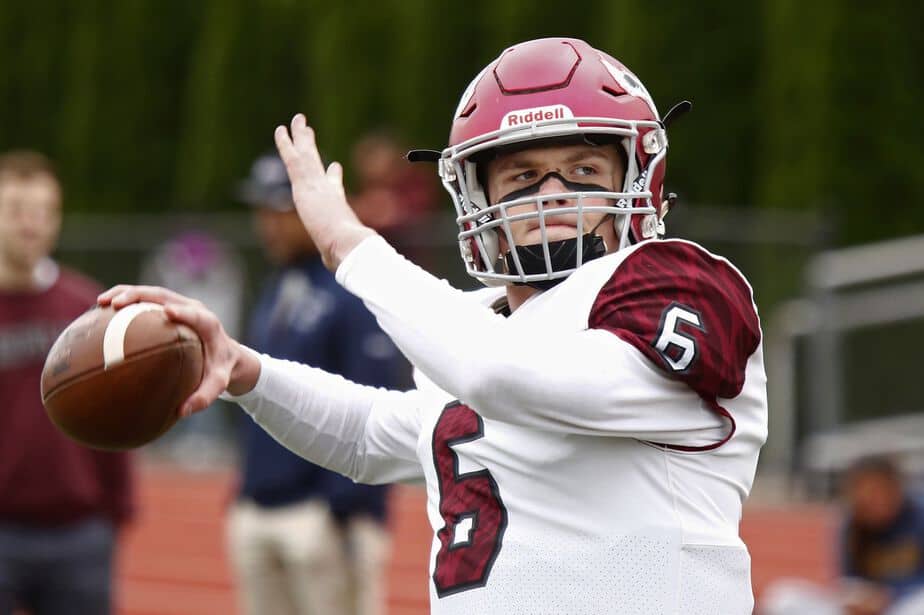 The Hawks are coming off an impressive 13-0 undefeated season and beat Harrisburg 40-20 in the Pennsylvania 6A State Championship. They have won 4 state titles in the last 6 seasons and have a 40-1 overall record since 2016. They have also won the Philadelphia City Championship 5 out of the last 6 years. The Hawks have dominated in state and have emerged as a national powerhouse program. The USAToday newspaper ranked them #6 overall in their final 2018 Top 25 National Rankings.

Tim Roken will be in his first season as the new head football coach. He was the associate head coach and offensive coordinator last season. Former head coach, Gabe Infante, left to be the running backs coach at Temple University. Infante coached 9 seasons and built a program that is soaring at an elite level. Roken will have big shoes to fill but should transition well into his new position.

The Hawks had a balanced, high-powered offense that averaged 44 points per game in 2018. They could beat you throwing the ball downfield and could grind it out on the ground. Their offense is like a luxury sports car that has power and speed, and the driver behind the wheel is quarterback Kyle McCord (6’3 205).

The junior signal-caller won just about every individual and team award you could win in a given season. He was the state finals MVP, All-State, All-Catholic, and All-Red Division during his sophomore season. He threw for 2,883 passing yards, 35 touchdowns, and completed 66.6% of his passes. His play on the field earned him several Division 1 scholarship offers after the season and he is now committed to Ohio State.

Kolbe Burrell (5’9 190) will be the feature back for the Hawks and has been a standout the last two seasons. He earned 2nd Team All-City honors and has 1,802 career rushing yards. He rushed for 149 yards in the state finals and finished the season with 923 rushing yards. This was after splitting touches with Marques Mason. Burrell will get the bulk of the carries in 2019.

McCord’s go-to target this year will be Marvin Harrison Jr (6’4 185). The junior caught 50 passes for 724 yards, scored 8 touchdowns, and earned 2nd Team All-City honors. The son of an NFL legend has racked up almost 20 Division 1 scholarship offers and is considered one of the best in the nation for the class of 2021.

Anthony Rightly (6’2 205) will be McCord’s other weapon in the passing game. He caught 10 passes for 137 yards and 5 touchdowns last season. He provided depth in the passing game last year, but his role will expand this year. He will get the touches this season and will show the state he has big-time potential. Don’t be surprised if he catches 50+ passes. He and Harrison should be one of the best duos in the state. Shamir Hagans (5’11 180) is the vertical threat, playmaker, and a burner (10.9 100M). He has several Division 1 offers and will be another great option for McCord. Reese Clark (6’1 195) and Ike White (5’11 160) are two talented 2022 receivers that will start and get a lot of balls thrown their way.

The bigs up front don’t get as much recognition as they should with all the skill position stars on this roster, but they are talented and the core group is all back. Casey Stephenson (6’2 295) and Matthew Geary (6’2 290) both made 1st Team All-Red Division honors last year. The most underrated player on the team is left tackle Matthew Lombardi (6’7 290). He has a Power 5 body and excelled during his junior year. Look for him to be their next big recruit that should pick up a lot of Division 1 interest before Signing Day. Brad Harris (6’4 250) is a young 2022 prospect that will be a key player on the offensive line.

The Hawks’ defense dominated in big games and only allowed 14 points per game on the season. They saved their best for last with a shutout in the semi-finals against Pine-Richland and had their way with Harrisburg in the championship game.

The Hawks’ brightest young star on the defensive side of the ball is Jeremiah Trotter (6’2 210). The class of 2021 prospect had 13 tackles in the state finals and earned All-State honors as a sophomore. He holds almost a dozen Division 1 offers including Michigan State, Baylor, Georgia Tech, Maryland, and Houston.

We mentioned Anthony Rightly earlier as one of McCord’s main weapons on offense, and he is also one of the Hawks’ top defensive players. The 2-way star led the team in interceptions last season and earned 1st Team All-Philadelphia and Catholic as a defensive back. He will get some help in the secondary from Zavier Atkins (5’10 177). The class of 2021 prospect will get his chance to showcase his skills on the big stage.

The Hawks will have a challenging start to the season, facing three teams that are ranked in the Top 10 in the nation in the USAToday preseason poll. They open up against #9 Marietta (GA) in week 1, #5 St.John’s College (MD) in week 2, and #8 IMG Academy (FL) in week 3. This could arguably be the toughest schedule in the country.

The Hawks definitely have some heated catholic league games during the regular season with LaSalle and Archbishop Wood, but they have proven they are capable of going the distance in the playoffs and a few new rivalries are forming on a bigger scale. We are talking about east versus west; Pine-Richland, Pittsburgh Central Catholic, and Harrisburg. Pine-Richland is the only team that has beaten St.Joseph’s in the last 3 years and that was in the 2017 state finals game. These teams all face off against each other deep in the playoffs and expect to see it again in 2019.

The Hawks have also been extremely aggressive with their non-conference schedule, not shying away from playing the best in the nation. These games may not have the history of what a rivalry is all about, but wins impart bragging rights; not only for their high school but for the entire state of Pennsylvania.

The Hawks have no doubt been one of the best teams in the nation, having won 4 state championships in 6 years. They won big in 2018 with some young talent, and the team’s most promising factor is that most of the players have 2 years left to play.

A new head coach for most teams would pose a lot of question marks, but the Hawks hired from within and should have a smooth transition with Roken leading the program.

They do have one of the most difficult schedules early in the season and will need to take one game at a time. They have the dogs to compete and win those big national games. If they do, look for the Hawks to move up the national rankings and show the country why people shouldn’t sleep on the state of Pennsylvania. It was once a priority destination for all colleges across the country and St.Joseph’s Prep may help open their eyes and let them know that it still should be.