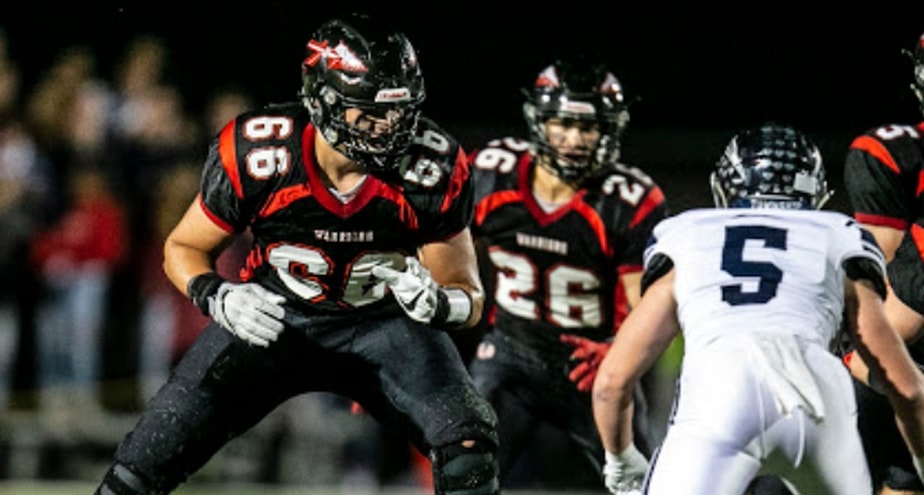 5-Star Offensive Line prospect, Nolan Rucci, announced his commitment to the University of Wisconsin, rejecting other top programs such as Clemson, Michigan, Notre Dame, and Penn State. Nolan will be teaming up with his brother, Hayden Rucci, a red-shirt freshman Tight End at Wisconsin.

The addition of Rucci is a big recruiting win for Wisconsin and disappointing for Penn State. The Nittany Lions lose out on another in-state prospect despite being where Rucci’s father attended, an NFL offensive lineman himself.

Considering Wisconsin’s ability to consistently produce NFL talent at the offensive lineman position, it is no surprise Rucci chose the Badgers. In recent years, Tyler Biadasz, Michael Deiter, David Edwards, and Ryan Ramczyk were all drafted into the NFL, after being a part of the Badgers O-Line. For Wisconsin, Rucci is the second-highest graded commit they have had in the last decade, so the expectations loom large.

All-American as a Junior

As a junior at Warwick, Nolan Rucci helped lead the Warriors to a 10-3 record and a semi-final berth in the Pennsylvania District 3 Class 5A. With Rucci anchoring the Offensive Line, Warriors QB Joey McCracken managed to pass for 2,900 yards, and RB Colton Miller hit the 1,300-yard mark on the ground. The Warriors offense averaged 36 points and 386 yards per game. Rucci was named to the USA Today All-USA second-team as a junior.

On film, Rucci uses his size and strength to overpower defenders. He finishes with authority and reaches the second level with ease. The combination of his unique athleticism and frame provides him with an uncapped ceiling. He may not start for Wisconsin out of the gate, but look for Rucci to be a top of the line collegiate starter early in his career, and a potential Day 1 pick in the NFL Draft.

Rucci is excited to be joining the Badgers, telling media, “I love how coach Rudy (Wisconsin offensive line coach Joe Rudolph) coaches his guys. The development is obvious, and you see the guys that they’re putting in the NFL in recent years and the guys that they’re going to be putting in the NFL. So, I’m excited to be part of that process and make my mark.”

Rucci will begin his senior season with Warwick on September 18th and will be looking forward to joining the Wisconsin Badgers in 2021.