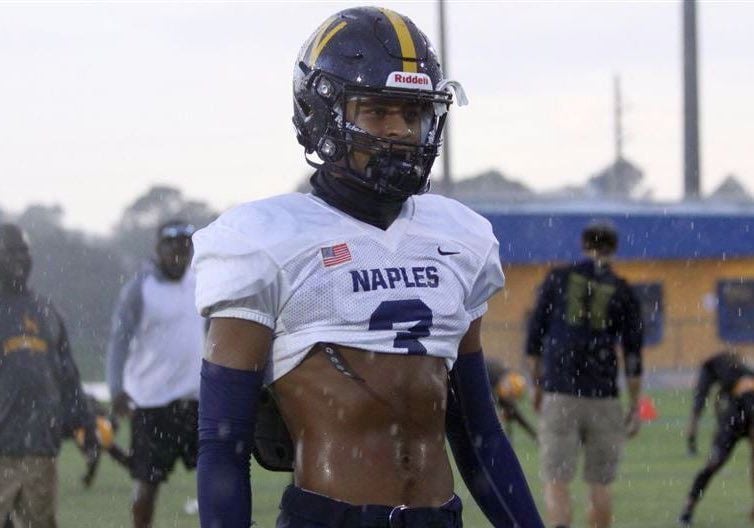 For first-year head coach Rick Martin, having to replace one of the winningest head coaches in the state of Florida in Bill Kramer was no easy task. He did an exceptional job in 2020 and led his Golden Eagles to a 7-2 record when their season ended at the hands of a tough Miami Central team in the 3rd round of the playoffs. Martin will look to build off of that inaugural season’s success and lead Naples to their first state championship since 2007 when they won the Class 3A state championship.

The Golden Eagles are no stranger to success. If you look at their history under coach Kramer then you will see this is one of the more successful programs in the Southwest Florida area. Kramer during his 22 seasons led Naples to 216 wins, 2 state championships (2003 & 2007), a state championship appearance in 2003, 8 regional championships, and 17 district championships.

Coach Martin will have his work cut out for him to try and replicate the dominance that Kramer achieved during his time with the Golden Eagles, but with a lot of talent returning as well as a schedule that includes teams that they usually dominate, don’t be surprised if Naples can make a run.

The Golden Eagle offense is extremely run-heavy, which makes sense when you look at the style of offense that they run. They run a buck-sweep type of offense with 2 backs lined up side by side in the backfield and the quarterback under center. The purpose of this offense is usually to wear down the defense and run off a large chunk of the clock in the process.

Last year, they averaged 20.4 points per game and 279.2 total yards per game. Obviously, with a run-heavy-oriented offense your passing game will not impress anybody statistically and 30.4 passing yards a game for 3 passing touchdowns throughout the year speaks volumes Their running game averaged 248.8 yards a game and 25 rushing touchdowns on the year.

Starting in the backfield for the Golden Eagles is the duo of 2022 Dustin McGill (5’11” 200 pounds) and 2023 Kendrick Raphael (5’11” 190 pounds). These two carry a heavy load for the offense, with McGill having 110 carries for 636 yards and 7 touchdowns, while Raphael had 86 carries for 661 yards and 9 touchdowns. McGill, who currently has an offer from Liberty, stays low to the ground, making it tough on the linebackers to read where he is on the field.  He boasts a good blend of speed & power for a winning combination. Raphael is efficient at reading his blocks and doesn’t go down easily, so when defenders can make contact they’ll have to bring more than just an arm tackle.

At quarterback for Naples is 2022 Stanley Bryant (6’2” 180 pounds) who will play receiver at the next level and currently has an offer from NAIA Keiser. During the 2020 season, Bryant threw for 205 yards and 3 touchdowns while rushing for 582 yards and 7 touchdowns on 105 carries. Watching his film at different camps, Bryant is a lengthy receiver who has the ability to make big plays if given the opportunity. The Golden Eagles have another receiver that colleges should keep an eye on in 2023 Keylijah Williams (6’0” 170 pounds) who has a lot of playmaking ability.

The offensive line will be led by 2022 center Jacob Tudor (6’0” 215 pounds) who is a solid player that does a good job at finishing through with his blocks.

Look for this offense to still be run-dominant. If, however,  they can figure out a way to throw the ball a little bit more to keep the defense off-balance, then they have a good chance at being a pain for defensive coordinators.

After a shaky start with a 38-0 loss to Palmetto Ridge to begin the season, this Golden Eagle defense responded in beautiful fashion shutting out their next 3 opponents. Throughout the season they averaged giving up only 12 points per game and forced 16 turnovers. They also had an average of 3.4 sacks a game.

The defensive backs will be the strongest unit returning for Naples, as they will be led by 4-star 2022 Devin Moore (6’2” 180 pounds) and 2023 Jonas Duclona (6’0” 175 pounds) at cornerback. Moore had 32 offers before he committed to Notre Dame. During the 2020 season, Moore had 26 tackles and 4 interceptions. His length allows him to have a lot of success in man coverage as well as being fluent with his hips. Moore also does a good job at making plays on the ball while it’s in the air. Duclona is an all-around great football player who holds an offer from Florida. He had 31 tackles, an interception, and forced two fumbles. On his interception, he read the bubble route perfectly and returned it for a pick-6 against Miami Central in the playoffs and also forced a fumble that game. One can say that Duclona shines bright when the lights are the brightest. He’s also a very physical player who has a lot of success in man-to-man coverage.

Another player to look out for on this defense is 2023 outside linebacker Kerry Brown (6’0” 165 pounds) who had a great sophomore campaign. Brown had 67 tackles and 3 sacks while showing his ability to be physical and have good speed off the edge whether that be a blitz or reading a run play. Look for him to only get better with the more weight and strength he adds.

Naples will open their season at home on August 20th against Lehigh. They will also get their opportunity for revenge against Palmetto Ridge at home on September 24th.

Coach Martin and his Golden Eagles will look to build off of their successful season in 2020, and hopefully return to glory for the first time since 2007.