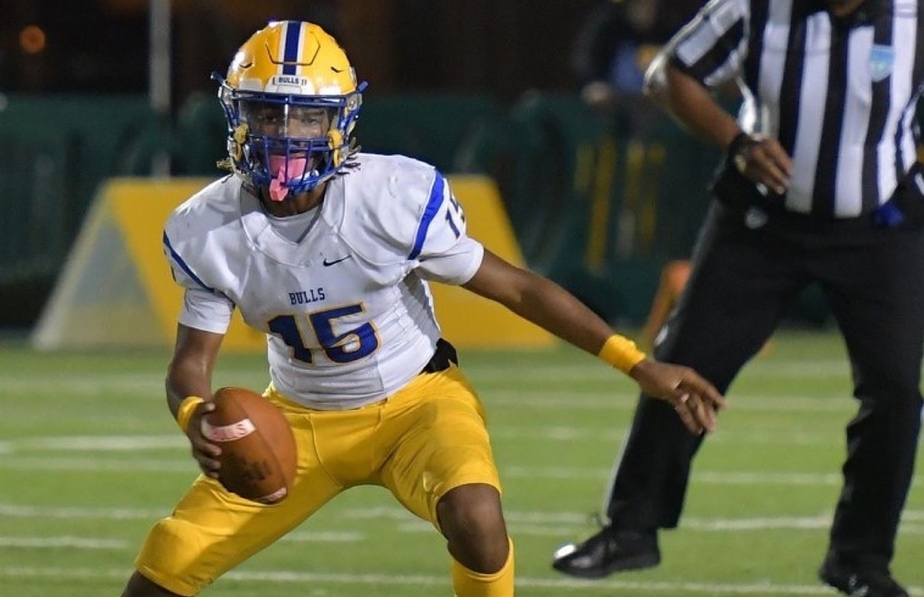 After dominating the previous 3 years of high school football in the state of Florida in both Class 5A and 6A,  and winning  3 consecutive state championships, 2020 was a subpar year for the Miami Northwestern football team. They finished the 2020 season 3-2,  losing to American Heritage 12-3 in the playoffs.

Look for the 2021 version of Northwestern to have a different tone to it as they will look to avenge their mishaps this past season and get back on track to their winning ways. After all, that’s what their history shows with 7 overall state championships and 2 runner-up finishes. Head coach Max Edwards has a 51-14 record and will only look to improve upon that.

Leading the bulls at quarterback will be a 2-year starter and 2023 Taron Dickens (5’11” 175 pounds) who currently has an offer from Nebraska. Dickens has a good pocket presence and reads the defense well. This enables him to get rid of the ball more quickly and hit his receivers in stride, allowing for more big-play opportunities.

2023 running back Jamari Ford (5’5” 175 pounds) is a transfer who will look to make an immediate impact for this Bulls offense with his Darren Sproles-like ability. The way that Ford is able to put his foot in the ground and change directions is impressive, especially with all the open running lanes that he will have. With the space he will have in this spread offense, look for him to have a big year.

The receiving core for this Bulls team is loaded and will be the main focal point of this spread attack. They’ll be led by 2022 Daverrick Jones (6’1” 163 pounds), 2022 Adrian Harris (6’0” 170 pounds), 2023 Andy Jean (6’0” 174 pounds), and 2022 Jalen Rogers (5’9” 146 pounds)). Jones is a big-time playmaker who is an Arkansas State commit, while Harris is another deep threat for the Bulls who currently holds an offer from Florida A&M. Jean is going to be a name for Florida prep football fans to know as he has a big frame and lots of potential, which has led him to receive 5 offers from schools like Georgia and Miami already. Rogers is a 3-star who is committed to Tulane, and every time he touches the ball there is potential for a big play due to his track runner-type speed.

This offense has the potential for a lot of big plays that will spark momentum for the Bulls, and help them to return to glory.

This defense will be led by their talented secondary. 2022 Jai-Ayviauynn Celestine (5’10” 175 pounds) has a Florida State offer and no fear of contact. Several times on film he would send someone’s helmet flying. 2022 Jamari Sharpe (6’2” 180 pounds) is another player to keep an eye on. He has a lot of speed, evidenced by his 10.67 time in the 100-meter dash. Sharpe holds 6 offers currently from schools that include Florida Atlantic and Florida International. 2022 Anjulius Minor (6’3” 180 pounds) is a transfer from American High School who uses his length well in coverage and will look to add more depth to this secondary.

The defensive line will be anchored by 2022 Dylan Milbry (6’2” 255 pounds) as well as 2022 Prince Richard (6’2” 235 pounds) who both like to play a physical brand of football that will set the tone early and often in the trenches.

The Bulls will start their season at home on August 20th when they welcome Venice who will be a tough matchup to open. On September 3rd they will host another tough opponent in Booker T. Washington. September 1st will be their biggest game of the year as they play their long-time rival Miami Central for bragging rights in the city.