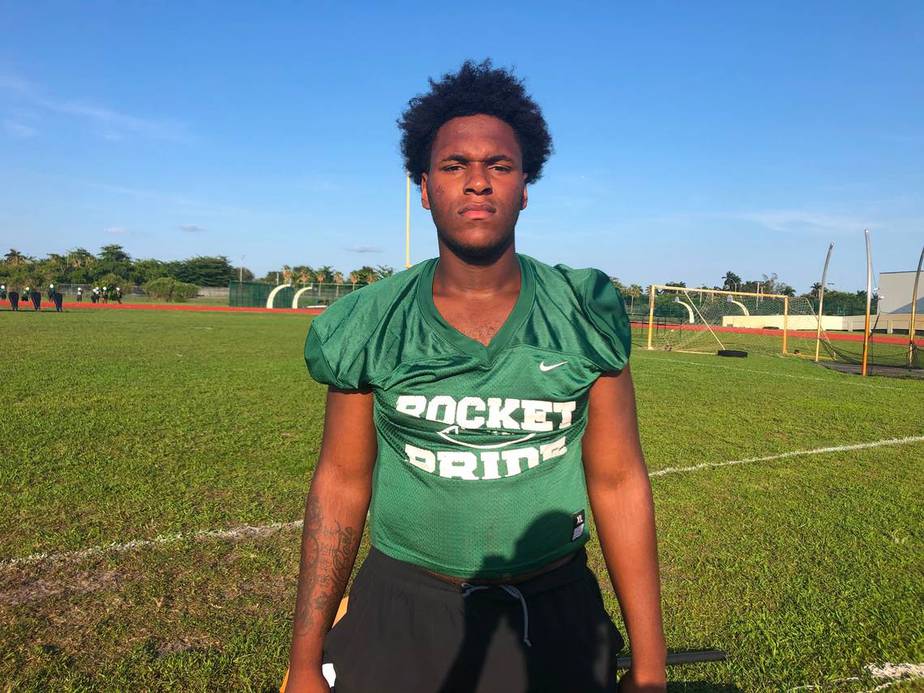 There’s always the endless argument of who the best team of a decade would be, and there’s no way to truly figure out who would be the winner of that argument. If you’re Miami legend head coach Roland Smith and the Miami Central Rockets football program then you have one heck of an argument. Going 116-20 while winning 6 state championships is something that not many teams can say that they’ve accomplished within the decade of 2010-2019.

The start to the new decade was another great one for the Rockets as they went 8-1 and won the Class 6A state championship in dominant fashion by beating Lake Minneola 46-0. This was a turnaround for Central after losing their opening game to their rival Miami Northwestern 21-14. The 2021 season shows a lot of potential for this Rockets team to continue their dominance due to key returning players and big-time transfer players to add to the mix as well.

The Rocket offense will be led at quarterback by 2023 Keyone Jenkins (6’ 185 pounds) who is incredibly accurate at throwing the deep balls. The lefty has great chemistry with his receivers, allowing him to have a good feel for when they’ll be breaking out of their routes. He has one of the better balls on a corner route that you’ll see in high school football.

Along with every good quarterback, there’s a good receiving core and that is no different with this Miami Central team. 2022 Zaylan Reese (6’1” 190 pounds) is an explosive playmaker that has sure hands, and currently holds offers from Indiana and Marshall. 2023 Lamar Seymore (6’2” 185 pounds) is a Miami commit who has good size for a receiver at his age and does a great job at high-pointing the football, leading to big plays on deep shots.

The running game will be led by 2022 Ghana Oboh (5’10” 190 pounds) who has a Florida Atlantic offer. Oboh is an extremely hard runner who doesn’t go down if you try to hit him high. He also will showcase his next-level speed if he has the opportunity to get into the open field.

In the trenches, the Rockets have 2022 3-star recruit 2022 Daughtry Richardson (6’5” 295 pounds) who is an absolute nightmare for opposing defensive linemen. Richardson plays until the whistle and that usually ends with the defender on his back. He currently has 24 offers from schools including Florida State and Arizona State. Another lineman to keep an eye on for the Rockets is 2022 Elijah Miller (6’1” 308 pounds) who was 2nd-Team All-State last year as a junior. Miller has a Northern Iowa offer and moves exceptionally well for someone his size.

This offense has the potential to be balanced and produce big-time numbers this upcoming fall. We’ll see how good they can be, and if they can help Central continue to dominate Florida high school football.

On the defensive end, this group is loaded from top to bottom and will have offenses scrambling to try and figure out what to run to try to be successful.

The argument can be made that the Rockets have the best linebacker core in the country considering they have 2022 Wesley Bissainthe (6’1” 201 pounds) returning for them as well as Hallandale High school transfers 2022 Dylan Reid (6’ 220 pounds) and 2022 Kheylan Martin-Brown (6’ 210 pounds). Bissainthe is an extremely versatile player who has shown the ability to make important plays in the run/pass game, returning a couple of interceptions for touchdowns during the 2020 season. He holds 27 offers from schools including  Alabama, Florida, and Miami. Reid is a  physical player who fills gaps hard and will punish the ball carrier. He has 9 offers from schools that include Penn State, USC, and Arizona. Martin-Brown is someone who plays with a high motor that his coaches love as well as being one of the most physical players on the field. Martin-Brown has offers from Maryland and Florida Atlantic.

As loaded as their linebacker unit is, the defensive line isn’t too bad either. They’ll be led by 2023 Reuben Bain (6’3” 250 pounds) who has 17 offers from schools like Florida, Georgia, and Miami. Watching Bain on film, the biggest thing that stands out is the pure strength shown in the way that he bullies other kids on the field. Look for his name to keep standing out in rankings. 2022 Raashaun Rainey (6’2” 255 pounds) is another player that’ll make some noise for this Rocket defense. Rainey currently has offers from Texas A&M, Maryland, and Jackson State. Rainey has great power and has shown on film the ability to pursue the ball with good speed. 2022 Kymani Williams (6’2” 230 pounds) is another transfer from Hallandale that will have an impact on the way he can force fumbles, Williams has 7 offers at the moment from schools like Penn State and Tennessee.

The secondary will be led by 2022 4-star Edric Wheldon (6’5” 215 pounds) who has 30 offers from powerhouses Alabama, Clemson, and LSU, to name a few. His height and reach allow him to make great plays on the ball as well as the ability to deliver big hits.

This defense has the potential to be the engine for another great Miami Central season. If they can live up to the hype, then it will be a long night for any opposing offensive coordinator.

The Rockets have an incredibly difficult opening to their season as they travel out to California on August 20th to take on national power St. John Bosco and then follow that up with a road trip to Las Vegas to take on the Gaels of Bishop Gorman. Following that, they return to their home state to take the road again to face Booker T. Washington. The game that’ll be highlighted on their schedule is when they look to regain bragging rights in the city of Miami when they face their rival Miami Northwestern on October 1st. With the amount of talent that this team boasts, it wouldn’t be shocking if the Rockets blast off early in the season. If Central can get off to a quick start, then don’t be surprised if they continue with sheer dominance and build their resume as being the team of the decade again.