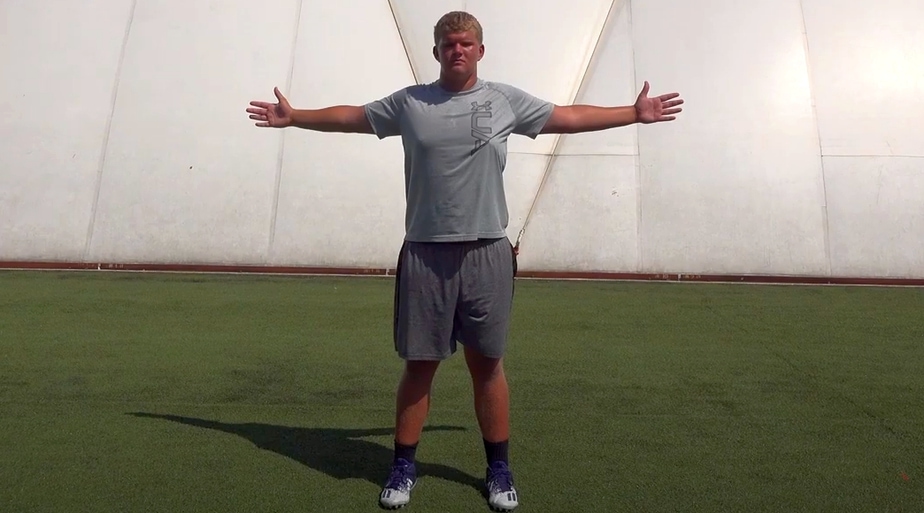 After a long wait and a reversed decision by the MHSAA, high school football starts this weekend in Michigan. The entire state is grateful to be back playing, and the juices are flowing to finally compete.

As we continue to break down the Class of 2022, one player to keep a close eye on is Garrett Masterson. The 6’7 307-pound junior is massive and a prospect that will start the season with no offers but will be a household name before it ends.

Masterson goes to Lapeer high school just outside of Flint, and his team opens up this Friday night against Saginaw Arthur Hill. “Saginaw Arthur Hill has a history of playing great football. Last season the Lumberjacks led a solid effort against us. I know in my short 16 years never to take an opponent lightly. I expect them to be a tough team, and I am fired up for my first game as a Junior,” said Masterson.

The Lightning is one of the favorites in the Saginaw Valley Conference this season. “Lapeer lost several senior leaders last season. But, new and exciting players have stepped up to fill the void. We look solid on both sides of the football!  Gavin Hartman, Jake Taunton, Dustyn Morell, Brayden McKenna, and my twin brother Brady Masterson are guys to watch this season,” said Masterson.

For every new season, there are new roles and responsibilities. “I see myself becoming more of a leader, encouraging my teammates on and off the field. I need to see myself as a “go-to” type of player that my coaches rely on. I recognize I need to be more vocal and an outspoken cheerleader for my team,” said Masterson.

Even with the pandemic, Masterson still made huge strides this offseason working hard to get better. Garrett has a twin brother, Brady, a 6’1 205-pound linebacker who is another top player in the Saginaw Valley Conference. The two of them worked out together every day and pushed each other. “The off-season was long. I normally would have had prospect camps and college visits, but they were canceled, as you know. I had to work with my brother at home, lifting and doing speed and agility drills in the spring. I was fortunate to have a home gym. My brother and I pushed each other. I was able to see a big increase in my strength and speed. I was proud of that considering the circumstances,” said Masterson.

Early in the offseason, Masterson did well at the Elite Big Man Camp back in January. He stood out from everyone with his size, and I knew the 15-year old at the time was going to be an outstanding player.

Garrett talked about his strengths as a prospect. “I am blessed to be 6’7,” and 307 lbs. I am coachable and have a great work ethic. I don’t complain and enjoy hard work. I use my size and strength to my advantage and have a solid punch at the point of attack. This is something I am proud of. I also have a 3.8 GPA.”

As a prospect, they all have things to work on and areas where they need to improve. “I worked hard on my footwork, sinking my hips, and on my pad level. These are all key areas I focused on this summer and fall,” said Masterson.

As a result of the pandemic, colleges have not seen Garrett up close, and it has slowed down his progress to build rapport and pick up his first offer. Some of the colleges in the early stages of evaluating Masterson are Duke, Eastern Michigan, Miami of Ohio, Bowling Green, Akron, Yale, Harvard, and Air Force. He also has several others that have followed him on twitter.

College coaches want to see how players progress from year to year. Once they are comfortable with what they watch on film and getting to know the kids a little better, usually good things happen. It won’t take long for colleges to see Masterson as a huge pickup for their 2022 class, and it all starts Friday night when his team takes on Arthur Hill.

A luxury most kickers don’t have is a coach on the football staff that was actually a former kicker. This is common at all levels 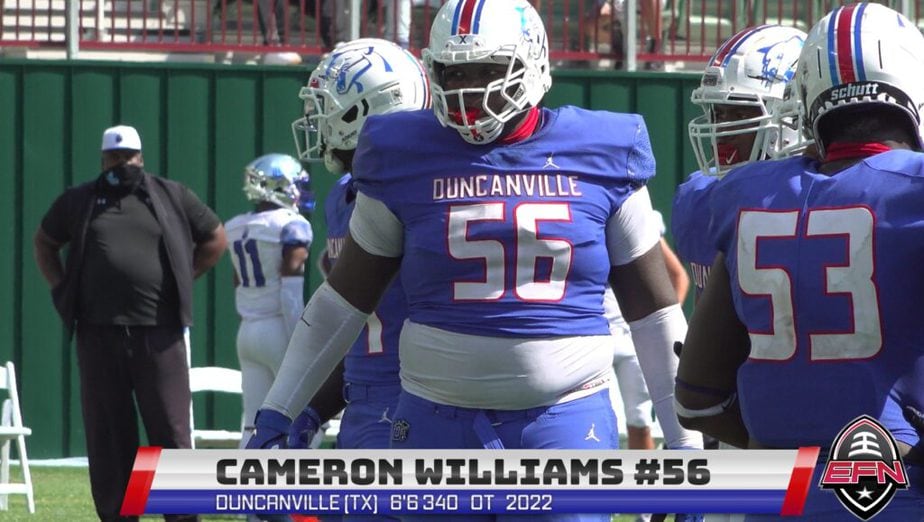 Cameron Williams (Duncanville) Video Highlights against IMG Academy. Williams is a 6’6 340-pound offensive tackle in the class of 2022. 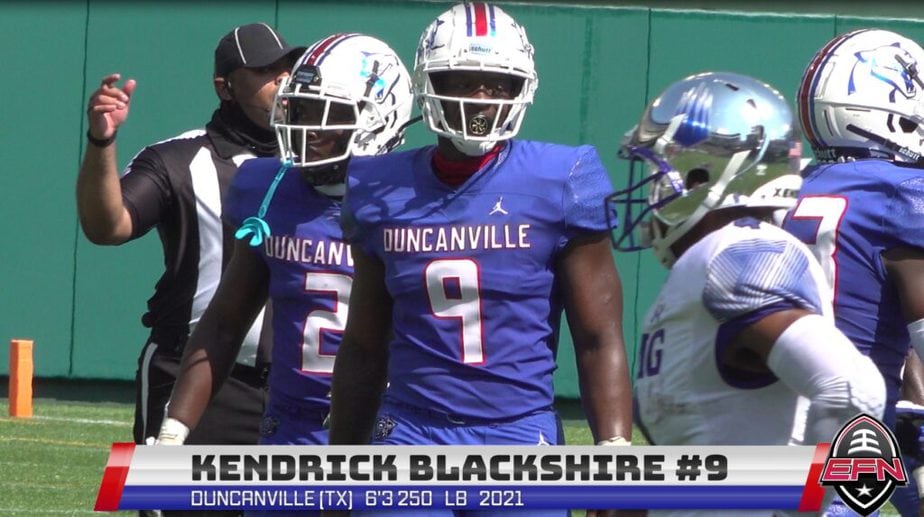 Kendrick Blackshire (Duncanville) video highlights against IMG Academy (Florida). Blackshire is a 6’3 250-pound linebacker in the class of 2021. 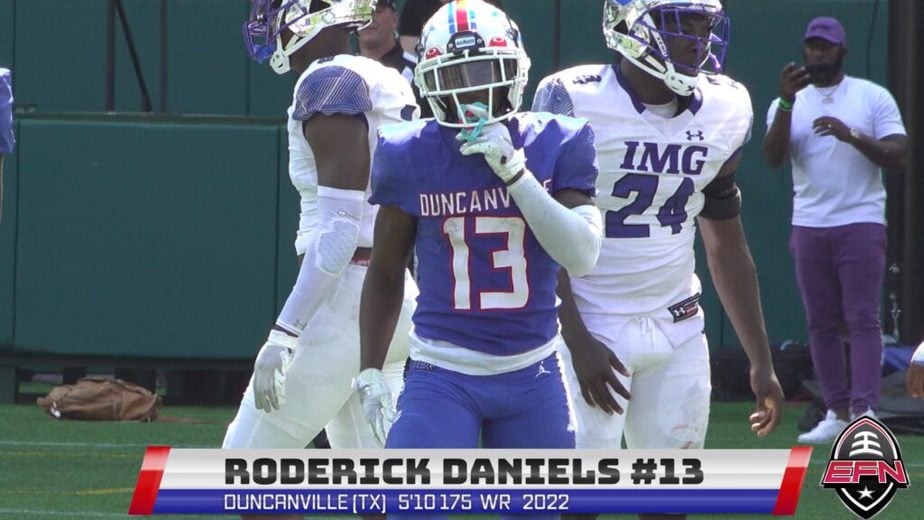 Roderick Daniels (Duncanville) video highlights against IMG Academy (Florida). Daniels is a 5’10 175-pound wide receiver in the class of 2021. 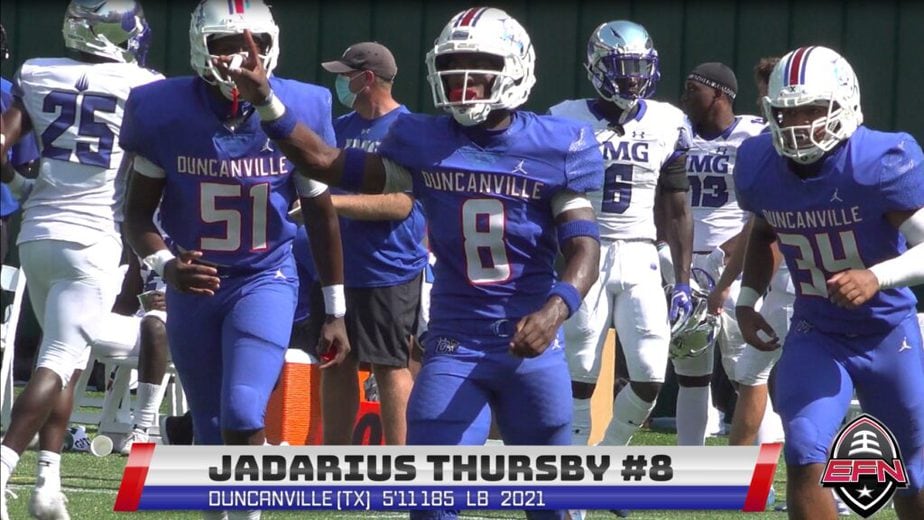 Jadarius Thursby (Duncanville) Video Highlights against IMG Academy. Thursby is a 5’11 185-pound linebacker in the class of 2021.