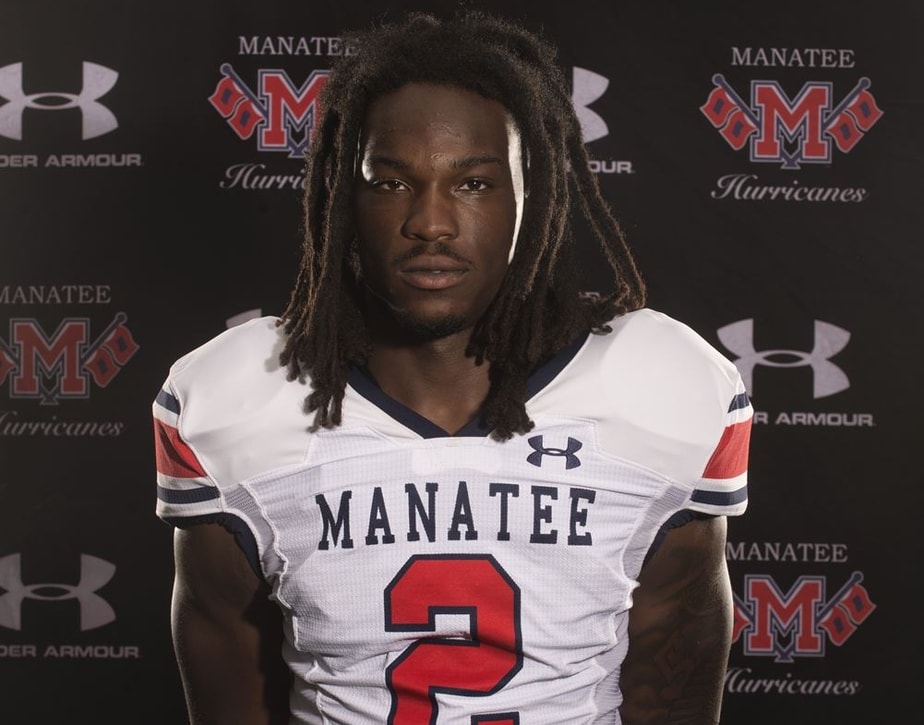 The 2020 season for the Manatee Hurricanes was one of the more drama-filled off-seasons you could imagine for a high school football program. It saw current head coach Jacquez Green have to step into the interim role for former coach Yusuf Shakir, who was suspended for the first 8 games for committing recruiting violations.  Shakir would later be fired as the Manatee head football coach, likely due to those violations. This led to Green being named the head coach.

Green has quite the resume for himself though; he was a second-round draft pick by the Tampa Bay Buccaneers as a wide receiver from the University of Florida. Green went on to play 6 seasons in the NFL and eventually got into coaching. His interim stint was a successful one, as he navigated the Hurricanes to an 8-2 season, eventually ended by future Class 7A state champion St. Thomas Aquinas in the playoffs.

The Hurricanes have a rich history. They’ve won 5 state championships and were runner-up twice. The last appearance Manatee made in the state championship was in 2011 when they won the Class 7A title. Green will look to bring the Manatee program back to glory.

The Hurricane offense was a solid group last year, as they averaged 27.8 points per game and 291.8 total yards a game. Manatee had a balanced attack, and the 2020 campaign saw them rush for 135.2 yards a game with 156.6 yards through the air.

Returning at quarterback for this offense will be 2022 Jayse Berzowski (6’1” 185 pounds), a southpaw with the ability to be accurate when moving out of the pocket. Berzowski has a solid arm and with his great timing with receivers, he makes throws with confidence.

2022 running back Kyree Jones (5’8” 225 pounds) is someone that needs more looks by teams at the next level. Jones is a Jerome Bettis-type player;  a bowling ball with deceptive speed.  Jones wouldn’t just be a goal-line threat at the next level either, as he’s shown the ability to catch out of the backfield and make plays doing so. Good luck to anybody that has to get in the way of Jones; even if they do manage to make the tackle, it will probably end with their back on the turf.

The receiving core will be boosted by Lakewood Ranch transfer 2022 Jaleel Duncan (5’9” 160 pounds) who is the definition of a playmaker. Duncan has track speed and will have lots of opportunities to make plays over the top, as a lot of the emphasis for defense will be on trying to stop Jones and the run game. Another player to look out for is 2023 TE Koby Keenan (6’6” 230 pounds) who has the tremendous size to go along with soft hands.

The good news for the Manatee defense is that there is room to grow from last year when they gave up 23.8 points per game while forcing 15 turnovers total. The even better news for them is that they will have a lot of talent looking to make a name for themselves this upcoming year.

The defensive line will be spearheaded by someone that has already been mentioned, Cameron McCloud. McCloud should have far more interest in this position than he is receiving at the moment. McCloud uses his massive size to bully offensive linemen and has a good burst off the ball to allow him to get the necessary edge. To say that McCloud is a dominant player would be an understatement. Another player to look out for on this defensive line will be 2025 Ean Johnson-Kelley (5’11” 249 pounds) who already has a phenomenal technique for his age. Once he becomes more experienced, he will be a terror for opposing offenses. Johnson-Kelley has shown good speed off the ball, mixed with strength which allows him to blow up interior run plays.

The secondary for this Manatee football team will be led by 2022 safety Tyreak Allen (6’ 174 pounds) who has an offer from Pittsburgh along with 3 other schools. Allen is versatile in that he can make plays in both the passing and running game. Allen has shown the ability to make plays on the ball, and a willingness to fly up when he sees that it is a run. 2023 Daniel Dunbar (5’9” 163 pounds) is someone else to keep an eye on. Even though he might not be the biggest, Dunbar shows no fear in the run game. Dunbar also does a nice job at recovering when he is beaten downfield.

Another player on this defense that is underrated when it comes to his recruiting is 2022 Cornell Thomas (5’11” 215 pounds), a linebacker that has great size and strength, allowing him to make ball carriers feel it when he makes contact. Thomas is a playmaker from his position and does an outstanding job reading the offensive line and flying through the gap to make the play.

The Hurricanes have a tough road ahead of them with one of the more difficult schedules in the state. Their season opens at home when they play Gulliver Prep on August 27th. They have another tough home game,  hosting Osceola on September 24th, and then take the road to play a tough Venice squad on October 8th. The Hurricanes’ last big-time regular-season game will be at home when they welcome in Bloomingdale on October 29, who is coming off their best season in school history.