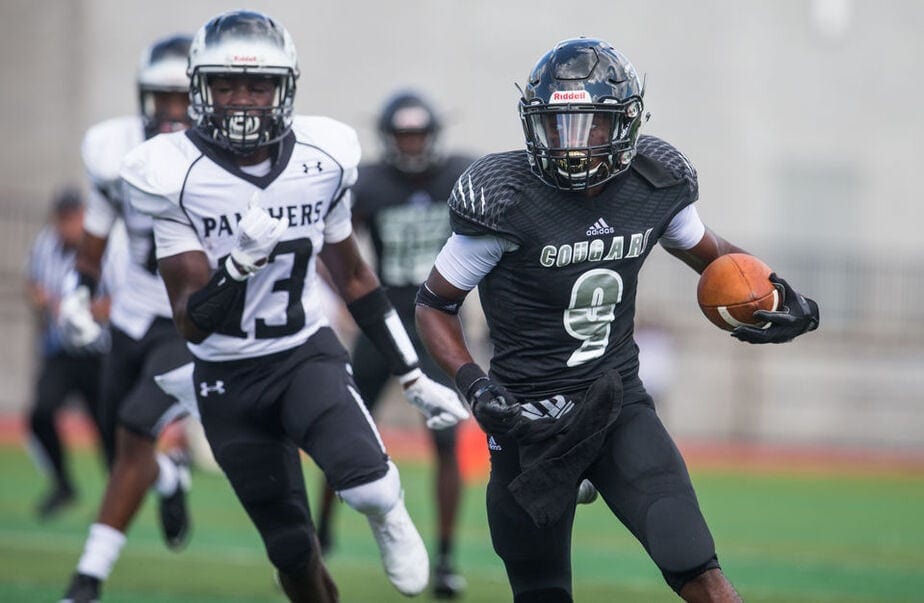 Harrisburg is coming off an incredibly successful season that saw them advance all the way to the 6A State Championship Game, before falling to St. Joseph’s Prep. With a 14-2 overall record, Harrisburg finished the 2018 season ranked #4 in Pennsylvania.

2019 is Calvin Everett’s 7th season as Head Coach of the Cougars. After a few somewhat quiet seasons at the beginning of Everett’s tenure, Harrisburg has won their league in back to back seasons. Everett played college football for a year at Florida A&M before transferring to Division II powerhouse Millersville. After a few years, Everett got into coaching and eventually took over at Harrisburg. He is taking over for a team that has an eye on making another deep playoff run, even though they will be losing several key pieces from their 2018 team, especially on the defensive side of the ball.

On offense, potentially the biggest loss for the Cougars is the graduation of 1st Team All-State quarterback Kane Everson. Everson is currently committed to William & Mary and is listed as an “Athlete”, which is fitting since he was all over the field for Harrisburg in 2018. Everson passed for just under 2,000 yards with 26 TDs and added 827 yards rushing with another handful of TDs. He was their most dynamic playmaker.

The Cougars will be losing a lot of talent on defense, led by the departure of middle linebacker Andre’ White Jr, who will be going to Texas A&M. White Jr. led the team with 135 tackles, including 12 tackles for loss, and had 3 sacks. Harrisburg will also be losing Jai Burney (Lincoln University), who was 2nd on the team with 111 tackles and had 12 tackles for loss. Defensive ends Brian Yates and Dionte Nichols will be difficult to replace upfront, as they had 6.5 sacks and 16.5 sacks, respectively, as well as adding a combined 39 tackles for loss.

Nicari Williams (6’2 175) returns at quarterback and will certainly be a player to watch in 2019. Even though he missed a chunk of the season in 2018, Williams was outstanding, throwing for 2,579 yards with 26 touchdowns, while adding over 700 rushing yards and 16 more touchdowns.

Jah’mir Plant (5’9 180) will be the starting running back, coming off a solid 651-yard performance in 2018, while also adding 238 receiving yards and 10 total touchdowns. Plant currently has one FBS offer from Toledo. Lamir Johnson (5’11 215) will also get a lot of touches in the running game. Jaylon Johnson (5’11 190) is a running back transfer from Susquehanna Township. He is a big play back that will get a lot of attention from colleges before the season is over.

The Cougars have two Power 5 offensive linemen, Nate Bruce, and Layne Brannon, both are class of 2021 prospects. Bruce is a 6’4 325-pound offensive guard that had an outstanding sophomore season and has picked up several Division 1 offers this offseason. He broke the school record this offseason with a 305-pound power clean. He also squats 545 pounds. Brannon is a 6’5 275-pound offensive tackle. He has the size and power to move defenders and open big holes for his running backs. Tyshawn Black (5’11 270) is a right guard in the 2022 recruiting class.

On defense, the Cougars will be led by Harold O’Neal (6’0 200). The linebacker was 3rd on the team in 2018 with 110 tackles, which includes 9 tackles for loss, and added 5.5 sacks. Jaylon Johnson is a 2-way player that will also play linebacker on defense. Jamani Heron is a talented 2022 linebacker that will be a starter in his sophomore season.

Upfront for Harrisburg, Sa’Quan Carter-Barton (6’2 228) will be a force off the edge. In 2018, Carter-Barton was very productive at defensive end, where he had 51 tackles and 8 sacks.

In the secondary, all of their top defensive backs are 2-way players. Jah’mir Plant (5’9 180) will return, following a very good junior season where he had 48 tackles, 2 interceptions, and 8 pass breakups. Donte Kent is a shutdown corner in 2018 and led the team with 6 interceptions, tallied 44 tackles, and 8 pass breakups. He will cover the other team’s top wideout each week, in addition to being Harrisburg’s top wide receiver. Trevion Carey played a lot on both sides of the ball last year and will be a free safety again this season.

The 2019 season couldn’t start off in a more challenging fashion for the Cougars, with their first two games as difficult an opening as any team has in the state. For the second straight year, Harrisburg will open against Coatesville. In 2018, Coatesville defeated Harrisburg in the opener, however, the Cougars got revenge in the State Semifinals, defeating Coatesville in a 27-24 thriller. Coatesville finished the 2018 season at 15-1, with their only loss coming in that Semifinal game to Harrisburg. In week 2, Harrisburg travels to Ohio to play defending State Champs Archbishop Hoban, who finished the year 15-0. They also finished the season ranked #13 nationally and #2 in Ohio.

Calvin Everett has built Harrisburg into a state powerhouse team over the last 3 seasons with a 36-7 record during this span. This 2019 team has some elite talent on both sides of the ball. Offensively, they have a big offensive line that will pave the way for their running game. They have speed on the outside with Donte Kent and a quarterback that threw for over 2,000 yards. There will be balance and it will be tough for teams to stop. Defensively, they will be fast and aggressive. The only question mark is they don’t have a lot of depth because most of their players are all playing offense and defense and that could pose a problem later in the season. If they can stay healthy during the regular season, look for the Cougars to make another deep run in the playoffs.