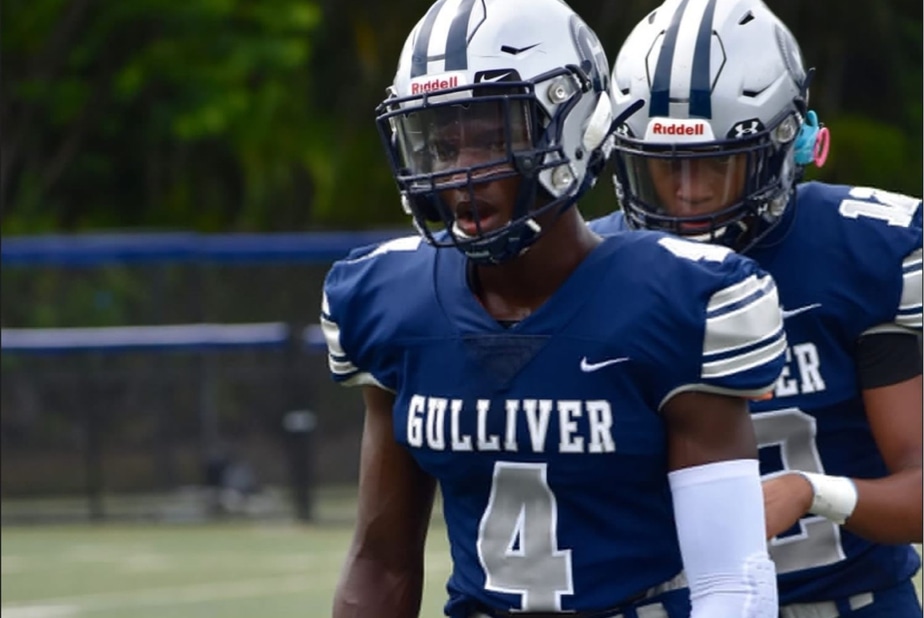 After back-to-back undefeated regular seasons for Gulliver Prep, head coach Earl Sims should be feeling good about the upcoming season for his Raiders. They have a lot of talent, and a lot of momentum after a 5-1 season that ended in a second-round playoff loss to state power Cardinal Gibbons. Coach Sims has turned this Raider program into a place that demands respect, and it should be evident this fall.

Sims has a nice resume himself, as during his playing days he attended and played football at Virginia University in the Atlantic Coast Conference. Once he took over as head coach at Gulliver Prep, he made an immediate impact. In his 3rd season, he earned the 2008 Herald Sports Coach of The Year award while leading his Raider team to the state championship game. Since taking over in 2006, Sims is 103-56 and is still chasing his first state championship with Gulliver Prep. It would be the school’s first championship since the 2000 season when they earned their only state title..

It wouldn’t be a surprise if this Raider team is still playing football in late November, and it also wouldn’t shock anyone if they were playing in the middle of December as well.

This Gulliver Prep offense is explosive, to say the least, and that can be credited to great coaching as well as incredible talent across the board. Last fall they averaged 35.8 points per game while averaging 294 total yards a game. Through the air, they would average 183.8 yards a game while rushing for 110.2 yards a game.

At quarterback for the Raiders is 3-star and Tulane commit 2022 Carson Haggard (6’ 170 pounds) who threw for 1,231 yards and 15 touchdowns in 6 games last season. Haggard shows tremendous accuracy, especially on his deep throws or even intermediate throws where he’ll hit the receiver in stride so that they can zoom away from the defenders. Haggard has a lot of zip on the ball which allows him to fit the pigskin in between tight spaces.

2023 running back Sedrick Irvin (6’ 186 pounds) is an exciting prospect to be on the lookout for these next two seasons as his recruiting picks up. He has 23 offers currently from schools that include Michigan State, Alabama, and Arizona State. He rushed for 552 yards and 6 touchdowns on 81 carries last year and looks for those numbers to only get better. The first thing that stood out on film and shows the type of character this kid has, was when there was a fumble and instead of giving up on the play, he chased down the defender from 10 yards behind and pushed him out at their 10-yard line. Irvin has speed and unique vision, he also does a tremendous job at making the first defender miss in tight spaces with his next-level agility.

The receiving core for the Raiders is stacked, and that all starts with 2023 4-star Jalen Brown (6’2” 170 pounds) who has 29 offers from schools that include Florida, Notre Dame, Texas A&M, and Michigan. Brown is the definition of a highlight show as every time he touches the ball he is a threat to take it to the house. He had 18 catches for 500 yards and 8 touchdowns last season, and those touchdowns don’t even include the multiple kick returns he took back to the house. He made several one-handed catches as well, while also showcasing his track speed which makes him a major deep threat. Alongside Brown are 2022 3-star De’Carlo Donaldson (6’3” 210 pounds) and 2022 4-star Travious Lathan (6’2” 207 pounds). Donaldson is another Tulane commit who had 15 catches for 245 yards and 6 touchdowns and can move efficiently for someone his size. He has great hands which he showcased with a one-handed touchdown. Due to his size and speed, he has a lot of explosiveness, making him hard to bring down. Lathan will be seen in the defensive section of this article as well but is just too productive at the receiver position to not feature in this offensive section as well. He has 30 offers from schools such as West Virginia, Michigan, and Florida and is a major deep-ball threat who has shown to have some wiggle as well.

The offensive line will be led by Homestead transfer 2023 Shelton Green (6’2” 338 pounds) who has 5 offers with the most notable school being Louisville. The other offensive lineman to be on the lookout for is 2022 Patrick Atkins (6’1” 183 pounds) who holds a Southern Mississippi offer. Both are big bodies who move well for their size and can bully defenders because of it.

The Raider defense shouldn’t miss a beat this upcoming fall, and should even take a step forward with their returning talent. Last year they forced 15 turnovers while only giving up 13.8 points per game.

The defensive line will be led by 2023 defensive end Lamont Green (6’4” 222 pounds) who is a Florida State commit. Green is aggressive and has a great frame that the Seminole strength coaches will love to work with. Green also has an elite motor that will make him easily coachable at the next level. 2022 defensive end Bakari Edwards (6’ 242 pounds) has a Kansas offer and showed his athleticism when he had an interception on a swing pass. He has good speed off the ball, plays hard, and uses his strength for big hits.

The linebacking core will be led by star receiver Travious Lathan who we previously mentioned. Lathan is great at coverage and uses his strength for big hits on the bubble and shallow routes. 2022 outside linebacker Jayvon Only (5’11” 205 pounds) has a Coastal Carolina offer. Only is a straight athlete, and flashed that with his pick-six. He is good in coverage, especially when it comes to flying up on shallow routes. Only is also a big-time hitter. 2022 linebacker Jonathan Fyne (5’11” 185 pounds) is another player to look out for. Fyne does a great job when he sees a play develop, exploding towards it and making the tackle.

2023 3-star Antonio Smith (6’3” 190 pounds) is going to be the one to anchor the secondary at his cornerback spot. Smith has 4 offers which include an offer from Florida as well as Boston College. At 6’3”, Smith uses his length well to make it difficult for quarterbacks to throw over the top of him.

This Raider team led by head coach Earl Sims will be awfully hungry to be able to win a state championship this 2021 season. With all the talent they have, it wouldn’t be shocking if they make a run at it.