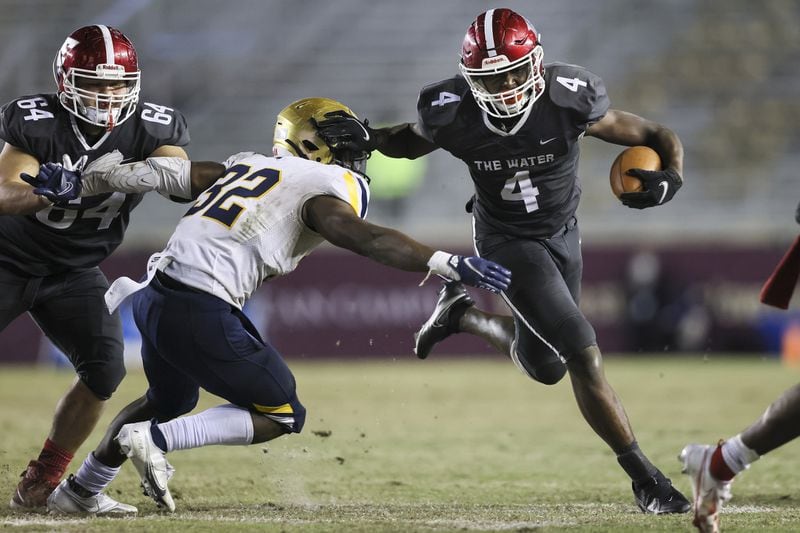 The Edgewater Eagles have been so close to achieving the ultimate goal of any high school football team these last two years, namely winning a state championship. However, even with back-to-back appearances in the Class 7A state championship game, neither has ended in triumph for the Eagles. In fact, none of the 5 appearances in state title games have ended in victory for Edgewater.

Last year, the Eagles were 8-2 before losing 31-21 to the state champion St. Thomas Aquinas Raiders in the Class 7A state championship game. Head coach Cameron Duke has had a successful stint so far in his five years as leader of the Edgewater football program, with a record of 43-20  while playing some difficult schedules.

After back-to-back seasons that ended in heartbreak for the Eagles, maybe the third time will be the charm this time around?

Even though Edgewater is losing their quarterback and a lot of production in Canaan Mobley due to graduation, look for 2023 William Carter (5’11” 160 pounds) to fill in that role nicely. He had a good-looking spring on film and showed off his arm strength with the amount of zip he had on the ball.

The Eagles have an absolute stud in their backfield and that would be 4-star 2023 Cedric Baxter (6’1” 215 pounds) who is a former Florida State commit. Baxter runs with a lot of force and is fantastic when it comes to his stop/start when trying to keep defenders in the open field off balance. Baxter also has great agility and demonstrates it in the way he can effectively change direction. Baxter currently has 28 offers and according to Rivals.com, Florida and Florida State are the frontrunners for this big-time recruit.

The receiving core lost a lot of production with 4-star Christian Leary (Alabama) and Kevin Butler (Eastern Kentucky) graduating. The Eagles will look for 2022 Jeremiah Connelly (5’9” 180 pounds) to have a big year for them. Connelly is a big-time playmaker and has a lot of speed to beat defensive backs on the deep ball.

Even with the loss of offensive lineman Devin Hevener (St. Thomas FL), look for this unit to still create running lanes for Baxter. They’ll be led by 2023 Michael Pedro (6’2” 290 pounds) who does a good job at holding his ground as well as 2022 Shaheem Hill (6’4” 310 pounds) who split time at guard and tackle last year for the Eagles. Hill does a great job of finishing his blocks.

If Carter can step up in his first year leading the Eagle offense to help out Baxter and the rushing game, then expect this offense to still have an effective and balanced attack, putting  pressure on the opposing offense to score over 20 points if they want to win

Last year, the Eagle’s defense had their struggles and that was evident,  giving up 22.3 points per game, not including the game they won due to a forfeit. They had some bright spots, however, forcing 12 turnovers in the way of 6 interceptions and 6 fumble recoveries.

The defensive line will be led by 2022 defensive end Winston Griffin (6’6” 220 pounds) who is a Marshall commit. Griffin has a great frame that the Marshall strength coaches will love to work with and turn him into a physical monster. The coaches at Marshall will also love Griffin’s motor and great effort on every single play. When hard-hitting Griffin gets a hold of the ball carrier, he makes them feel it.

The secondary for the Eagles will be led by 2022 BJ Williams (5’10” 155 pounds) and 2022 Chrishaun Anderson (5’10” 180 pounds) who both had solid seasons last year. Williams had 31 tackles and 5 deflected passes, also forcing and recovering a fumble. Anderson had 35 tackles coming from his safety spot.

With the loss of Miami commit Deshawn Troutman at linebacker and Arizona State commit Tommi Hill, there will be a lot of opportunity for guys on this defense to step up and make a name for themselves. If they can just be a little bit better than last year, which is very doable, then look for this Eagles team to have a lot of success.

The schedule for Edgewater does no favors for a team that is young, and they will open their season at home on August 27th against Bishop Moore. Their schedule also features a road game on September 3rd at Venice, a home game against Jones on September 10th, and on September 24th the Eagles will be traveling to Apopka. The month of September will be a good indicator of whether or not this team will have a  chance at winning their first-ever state championship in school history. However, if they make it out of September confident and battle-tested, then look for this season to be a special one.