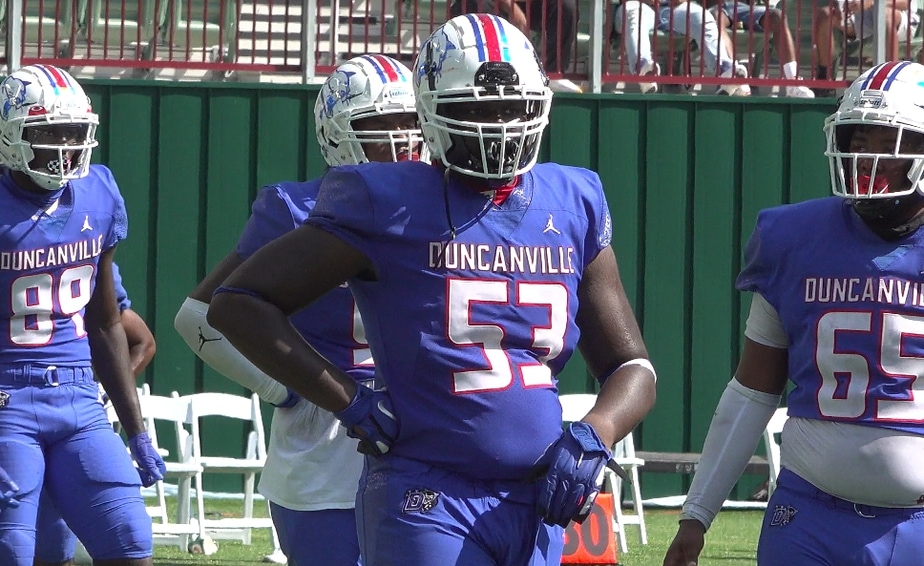 Florida State Seminole fans know that in order to get back on top of the ACC and a chance into the Final 4 they have to win the recruiting battles with all the other elite programs. Today, they received a verbal commitment from one of the most highly touted offensive linemen in the country. The Noles have to be happy about this one.

With their 18th commit in the 2022 recruiting class, Florida State picked up Jaylen Early from Duncanville High School in Texas. The 6’5 315-pound offensive guard announced his decision earlier today.

From his top 6 schools, the Seminoles beat out Oklahoma, Texas A&M, Ohio State, Texas Tech, and Penn State. Early also had offers from Texas, Alabama, Georgia, LSU, and about 25 other Power 5 colleges. He will join his high school teammate, Jerrale Powers, in FSU’s 2022 class.

After an official visit with Florida State on June 25-27, Early went on a few more officials, but in the end, the Seminoles won out. With his commitment, Florida State is now 8th overall in the country with their 2022 recruiting class. Early is their 4th highest rated player.

When you analyze Early and what he brings to the table, you have to start with his high school team and all the success they have had. Duncanville has been a Top 10 overall team in the nation and Top 4 in the state of Texas for several years. The Panthers have a 39-4 record during his time there and they have played in 2 Class 6A state championship games. His team is a powerhouse program with top-tier talent and they are used to playing the best competition in the country.

As an offensive lineman, Early has the size, strength, and athleticism. His physical traits are exactly what Power 5 coaches want from their recruits. He gets out in space with ease when he pulls and he packs a mean punch at the point of attack. Jaylen is a strong run blocker that can open up some big holes for his running backs. As a pass blocker, he can stay in front of pass rushers and is as reliable as they come protecting his quarterback.

Early Leads the Way Up Front

A position group that the Seminoles have to do well recruiting is the offensive line. So far in the 2022 class, 6 of the 18 commits are offensive linemen, with Early having the highest rating. This has to be the foundation of what will bring them back to prominence.

Early and his Panther teammates will get a huge test in week 1 when they host #1 ranked Mater Dei out of Santa Ana, California. This will be the Game of the Week for almost every media outlet in the country. EFN will be on hand in Texas to cover the game.

With Early’s commitment, this is another big step for Florida State and hopefully, they can continue to develop the pipeline with future Duncanville players. This will also make a statement nationally for other blue-chip recruits considering Florida State.