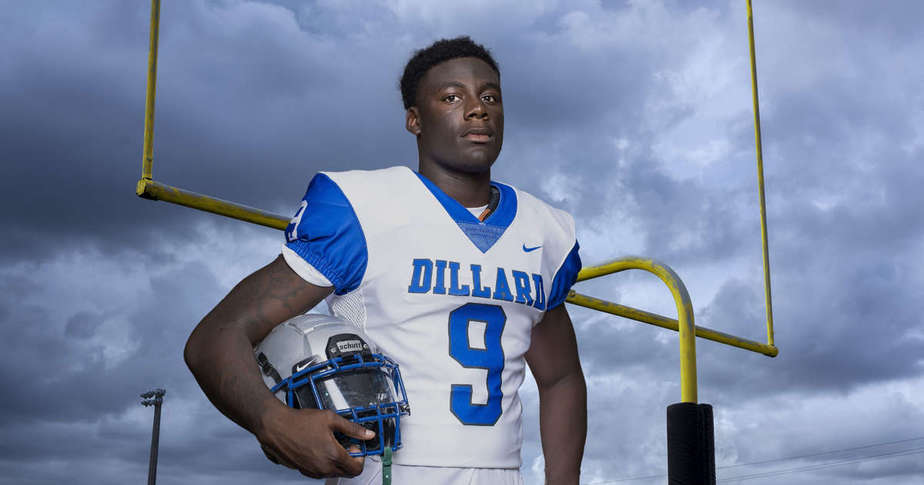 It’s been a difficult few years for the Dillard Panther high school football program, and nothing has to do with the actual football being played on the field. They had four different head coaches in 4 years before current head coach Tyler Tate took over the program. They also had to deal with the Covid-19 pandemic, which led them to opt-out of the state tournament this past fall. Eddie Fraser was the previous coach before Tate took over. However, Fraser tragically and unexpectedly passed away before the season began.

The 2020 season saw Tate and his Panther program triumph through adversity, going 6-0 while blowing out most of the teams they faced.. Dillard is a proud program, and no one would know that more than Tate, himself a Dillard alum. Following Dillard, Tate went on to play his college ball at Jackson State University. Tate will be looking to lead his alma mater to their first state championship appearance since 2000 when they lost in 6A to Palm Bay 10-6. Dillard is hopeful this may be the year they win their first state championship since 1989.

This Panther offense will be led by 2023 quarterback Armani Norcius (5’10” 165 pounds), a future stud. Noricus has a big-time arm for someone his size and can throw accurately on the run as well. However, one of the most significant assets that Norcius has is his mobility. Whenever the pocket breaks down, Norcius can scramble and make a play out of it.

The Panthers have a great running back in 2022 Method Bradley (5’11” 182 pounds), who has a lot of variety in his running style. Bradley can beat you with his vicious stiff arm or the shake and bake he employs to make defenders miss. But, even if you do get a hold of Bradley, it takes more than an arm tackle to bring down this strong runner.

2022 Florida State commit Devaughn Mortimer (5’11” 178 pounds) is a receiver with great hands and impressive effort, laying out multiple times to make diving catches. Mortimer is silky smooth in both his routes and his run after the catch. 2022 Jaccarri Shakes (6’3” 185 pounds) will be a name to look out for this year as his recruiting picks up. Shakes has a Toledo offer at the moment and is a freak athlete who can make tough contested catches.  A couple more receivers to watch are 2023 Aidan Norcius (5’11” 170 pounds) and 2024 Marcus Striggles (5’9” 175 pounds). Striggles is already starting to get attention from Division 1 schools, and deservedly so, given how crafty the young sophomore already is for his age.

The offensive line for Dillard has a lot of size, featuring 2022 Vondarius Faulkner (6’1” 285 pounds) and  2023 standouts Christopher Alexadre (6’6” 320  pounds) and Rico Jackson (6’5” 285 pounds). Jackson is the headliner of this group and has offers from Miami and Syracuse. His accolades are well deserved, and he does a great job of running his feet to punish his defenders and plays through the whistle.

This Panther defense has a lot of talent, and it all starts up front with 2022 Nyjalik Kelley (6’5” 240 pounds), a monster defensive end. Kelley has 24 offers, including big-name programs such as Miami, Clemson, Florida, and Michigan. Kelley has a long frame and does a great job of using that to his advantage. He rarely allows the offensive lineman to get hands-on him, has an impressive wingspan, and can deflect passes at the line of scrimmage. Whoever is blessed to coach Kelley in college will also be thrilled with his high motor, and that when he makes contact with the ball carrier, they feel it.

The linebacking core has some under-the-radar players with 2022 Christian Murphy (6’2” 215 pounds) and 2023 Joshua Bowen (6’3” 210 pounds). Both were hybrids, playing between the linebacker spot and the defensive line position. Both have great timing with the snap count and are explosive.  Murphy is more physical in using his size to his advantage, while Bowen does a great job of using his speed to get by offensive linemen. Murphy currently has offers from South Dakota and UAB.

This secondary is beyond loaded with talent for Dillard, and it all starts with 2022 D’Mon Brinson (5’11” 175 pounds) and 2023 Trevaughn Martinez (5’11” 175 pounds). Brinson is a Uconn commit who is a turnover machine for this defense. He’s a heads-up player who plays the game smarts and always seems to be in the right spot at the right time. Martinez has offers from Penn State, Syracuse, and Pittsburgh. Trevaughn is an excellent all-around safety, as he does the three most important things a safety needs to do; he is a ball hawk that forces turnovers, comes up well in the run, and can make open-field tackles. 2022’s Avontae Smith (6’1” 190 pounds) and Stephen Landers (6’1” 190 pounds) are two players that will make a significant impact for this hard-hitting secondary. Smith has an offer from Florida International and does a great job of being a hybrid player that comes up on the run. Landers is similar in the way of coming up well on the run. In addition, Landers has more length, which allows him to have more impact in the passing game. Last but not least, the youngster 2024 Antoine Jackson (6’1” 175 pounds) has six offers from elite programs that include Miami, Florida, LSU, and Florida State. Mainly for his age, Jackson is a fantastic tackle possessing uber athleticism.

The schedule for the Panthers features some top-level opponents, and they will start their season on the road against Boyd Anderson. The following week they will host Deerfield Beach, which is known for having a lot of talented players, and this year will be no different. The one highlighted on the schedule is October 22nd, when they travel to national power, St. Thomas Aquinas.

October 22nd will be a big test to see if the Panthers can make a legitimate run at a state championship, and it will be fun to watch. They will be in 7A this year for the playoffs, so there is no better way to show how they’ll fare within than a test with the defending champs.