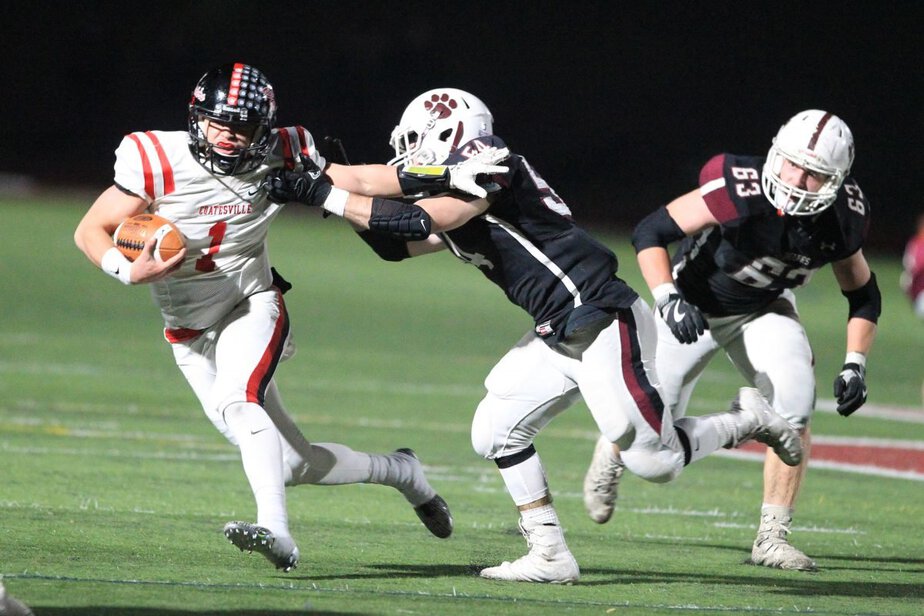 Coatesville’s dream season in 2018 came to a heartbreaking close, as the Red Raiders dropped a nail-biter to Harrisburg 27-24 in the 6A PIAA State Semifinals. Despite the loss, there is a lot for Coatesville to be proud of, as they finished 14-1 overall and won their league for the third consecutive year. Coatesville dominated opponents in 2018, winning by an average of nearly 33 points per game. This dominance was good enough to end the year ranked #3 in the state of Pennsylvania.

2019 will be the 11th season for Matt Ortega as Head Coach of the Red Raiders. Ortega has done a tremendous job, winning five league championships and turning Coatesville into a powerhouse. Before getting the head job at Coatesville, Ortega was the Head Coach at York High School, following one season at Harrisburg High School as Defensive Coordinator. Ortega has compiled a 112-41 record as a Head Coach and has coached over 30 Division I players. That number will increase at the end of the 2019 season, as several of his players have already received Division I offers. Ortega’s Red Raiders are primed for another deep playoff run in 2019, however, they open the season with a stiff test against Harrisburg, in a rematch of the 2018 Semifinals. The teams also opened the season last year, with Coatesville getting the better of Harrisburg.

Arguably the biggest loss on offense is Aaron Young, who will be playing at Rutgers this fall. The 6-0, 190-pound running back rushed for 1,641 yards in 2018 on a blistering 9.4 average yard per carry and 28 touchdowns. Young also added over 300 yards receiving and an additional 4 touchdowns. Aside from Young, wide receiver Dymere Miller will be a significant loss for the Red Raiders, as he had 523 yards on 26 receptions in 2018 with 10 touchdowns, all of which were second best on the team.

On defense, Coatesville loses 4 of their top 5 tacklers from 2018 in linebacker Nikolas Thompson, defensive backs Charles Brown and Frankie De Los Santos and defensive lineman Tione Holmes. Thompson, who will be playing for Division II Kutztown in the fall, led the team in tackles (94), sacks (7), and tackles for loss (15) in 2018. Holmes provided strength up front with 4 sacks and 12 tackles for loss, while Frankie De Los Santos had a great year in the secondary with 59 tackles, 6 tackles for loss, a sack, an interception, and two fumble recoveries. These are some of the key playmakers that Coatesville will need to replace in 2019.

The lethal 2018 combo of quarterback Ricky Ortega (6’0 185) and wide receiver Dapree Bryant (5’9 180) will not only remain intact for this next season, but potentially 4 more years after Coatesville. Both players have committed to Villanova as part of their 2020 class. Ortega was the Player of the Year in Chester County and made the offense go in 2018, throwing for 2,507 yards and 36 touchdowns, with only 5 interceptions, while also adding 953 yards rushing and another 13 touchdowns. His dual-threat ability is a big part of the reason the Red Raiders averaged over 40 points per game. Bryant was easily his favorite target, catching 52 balls for 1,009 yards and 15 touchdowns, all of which led the team by a wide margin.

The loss of Aaron Young does leave a void in the run game, however, Shamaur Hall has shown he has the talent to be able to step in and be productive in the backfield. Fortunately for the Red Raiders, tackles David Bostic (6’2 315) and Jake Walton (6’3 250) will be returning, providing some experience up front to help the run game.

Even though Coatesville is losing 4 of their top 5 leading tacklers from 2018, they certainly will not be without talent. Inside linebacker John Ruttman (5’11 215) had an excellent 2018, finishing 2nd on the team with 76 total tackles and 5 tackles for loss.

Arguably the biggest playmaker from 2018 that will be returning is defensive tackle Jon Meeks (5’10 240), who finished with 13 tackles for loss and 5 sacks. Meeks will play alongside Quadir Jacobs (6’0 265), who looks to have a breakout season in 2019 as he will likely get fairly significant playing time.

In the secondary, Coatesville is looking strong with defensive backs Abdul Sabur-Stewart, Dapree Bryant and Shamaur Hall all returning as the three leaders in interceptions in 2018.

The Red Raiders will get a rematch of the 6A State Semifinal game in week 1 against Harrisburg. It was a 27-24 heartbreaking loss last season. They had the entire offseason to think about it and use it as motivation to prepare even harder for this matchup and new year.

They will also have a huge game against Downington West in Week 8. They were 11-2 in 2018. Quarterback Will Howard is committed to Kansas State and he and his team will be looking for revenge and bragging rights.

Downington East and Bayard Rustin both finished 9-3 last year and will be tough games late in the regular season.

The Red Raiders will have some challenges this season but Matt Ortega will have his team ready. They have the talent and a good core group of players returning on both sides of the ball. They definitely need some of their first year players to make a strong contribution. After the first game and playing a powerhouse team, they will know what adjustments need to be made going forward.

Dapree Bryant and Shamaur Hall will be playmakers on offense and defense. Ruttman, Meeks, and Jacobs will lead the defense.

When you have an elite quarterback, anything is possible in November and December. Ricky Ortega has had a storybook career putting up serious numbers in his first 3 seasons, but he has one more unwritten chapter left to write before he finishes. This chapter starts with Harrison and he knows how he wants to tell the story in this game and for the season.