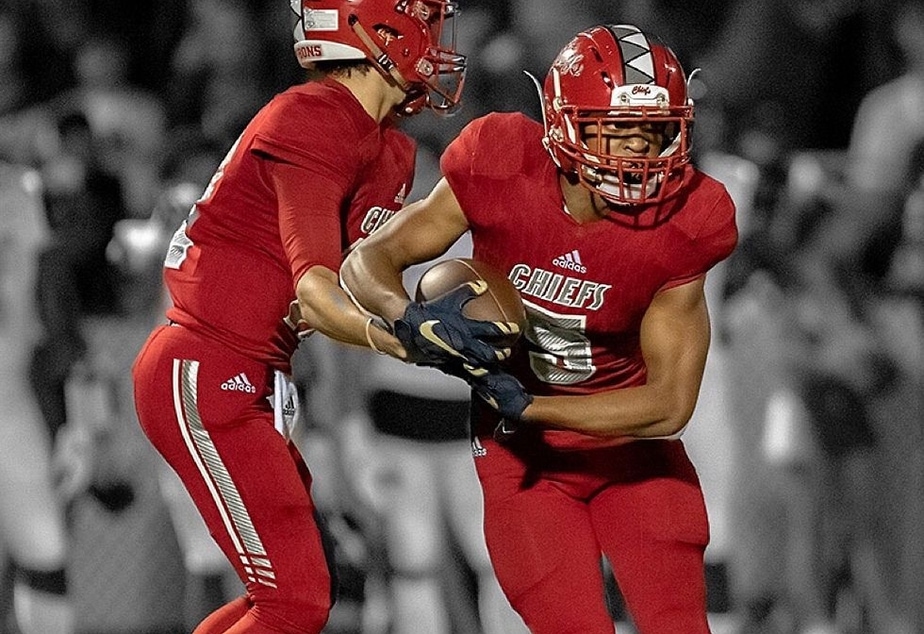 These are the first state championships that Cardinal Gibbons has won in football, and coach Debuc and company don’t plan on them being the last ones that they win. During the 2020 season, Cardinal Gibbons went 8-1 with their only loss coming at the hands of American Heritage. They finished as the 3rd overall ranked team in Florida and 22nd nationally according to MaxPreps.

Look for the 2021 version of the Chiefs to have similar success under coach Debuc, as they try to repeat as Class 4A champions.

During the 2020 season, the Chiefs offense averaged 29.2 points per game while putting up 320.7 yards a game. They had 1,486 passing yards on the season, in addition to 19 passing touchdowns and 1,400 rushing yards, and 11 rushing touchdowns.

At quarterback for the Chiefs will be Luke Warnock (6’0” 185 pounds), a sophomore replacing Brody Palhegyi (Tusculum) who graduated with the 2021 class. Palhegyi accounted for 1,216 passing yards and 17 touchdowns last year, and Warnock will have to have similar production for this offense to be successful. Warnock shows a solid pocket presence and has a strong arm to go along with it.

The Chiefs have two running backs that will be returning for them this upcoming fall that had productive 2020 seasons. 2023 Kamari Moulton (5’11” 185 pounds) and 2023 Torrence Miller (5’8” 160 pounds) have both shown the ability to be able to catch out of the backfield, as well as the ability to accurately read blocks. Moulton is more of the power type of back, who in 2020 had 502 rushing yards and 4 rushing touchdowns to go along with 1 receiving touchdown. Miller is more of a scatback, with 324 rushing yards and 4 rushing touchdowns last season.

The receiving core will be missing 4-star Troy Stellato (Clemson), but will still have talent returning that will help Kendall in his first year as the starting quarterback for the Chiefs. Davon Kiser (5’8” 160 pounds) is a senior who holds a Navy offer. In 2020, Kiser had 251 receiving yards and 3 touchdowns. Elisha Edwards (6’1” 200 pounds) is another senior receiver that should have more of a breakout role this season. During 2020, he had 119 yards and 2 touchdowns and showed that he has the ability to make plays on the 50/50 ball. Junior Jesse Anderson (6’2” 180 pounds) will be another name to look out for this season. Patrick Stapleton (6’2″ 185 pounds) is a 2023 receiver that will emerge as another big weapon in the passing game.

The offensive line will be led by senior Jackson Crozier (6’4” 275 pounds) at left tackle, a first-team all-state player with 3 current offers that include Holy Cross and Bryant. Crozier has shown the ability to get to the second level not only on running plays but on screen plays as well. Crozier is physical and will drive his opponent into the ground. Vinny Colasacco (6’1″ 268 pounds) will start at center after transferring in from American Heritage. Jonathan Rodriguez (6’5 280 pounds), John Bock (6’4 290 pounds), and Kenny Moore (6’3″ 310 pounds) will all give the Chiefs the size and muscle up front to help move the chains. Jackson Campbell (6’2″ 245 pounds) is a 2024 prospect that will add depth on the offensive line.

Look for this offense to have a well-balanced attack that will have new faces shine in their roles for the Chiefs this upcoming fall.

The defense for the Chiefs in the 2020 season was a strong part of the reason why they won the Class 4A state championship as they gave up an average of 12.4 points per game. They created 13 turnovers that included 9 interceptions and 4 fumble recoveries.

2022 linebacker Tray Brown (6’0” 217 pounds) will be the leader of the defensive unit. Brown currently holds 10 offers from schools such as Florida, Indiana, and Kentucky and is a 3-star according to Rivals.com. In 2020, Brown had 71 tackles and an interception for the Chiefs and is a fantastic blitzer who times it up perfectly. Playing alongside Brown will be 2024 Carlos Dales Jr (6’0” 225 pounds) who is a transfer from TRU Prep Academy and was an Under Armor NEXT All-American.

On the defensive line, they’ll be losing Jah-Mal Williams (Cincinnati) and Jack O’Keefe (Florida State) but will still have a solid bunch returning. 2022 defensive end Mason Thomas (6’2” 216 pounds) is an athletic kid that has everything you want in a high-level defensive end. He picked off a swing pass against St. Thomas Aquinas last year and returned it for a touchdown, and also had multiple sacks for safeties. He’s shown the ability to beat the offensive lineman with either power or speed and while he is only a 3-star, makes plays as if he is one of the best in the country. In 2020, he had 45 tackles with 7 sacks and currently has 10 offers from schools including  Indiana, Penn State, and Iowa State.

Greg Otten (6’1” 215 pounds) is another player you should keep an eye on in the 2023 class, as he’s listed as an outside linebacker but plays more of a defensive end role for the Chiefs. In 2020, he had 31 tackles to go with 2.5 sacks. He has great explosiveness and will be a pain for any offensive tackle to deal with due to his speed off the ball.

The Chiefs secondary is losing Zachary Farris (Dartmouth) due to graduation but will have Isaiah Farris (6’0” 160 pounds) returning for them at corner. Farris, who is a senior, had 3 interceptions during the 2020 season for the Chiefs and will have to build off of that for them this upcoming season. He currently has a Syracuse offer, but with the way he has shown to press receivers and be a lockdown corner, don’t be surprised if more schools start calling and offering Farris.

This defense will rely heavily on their defensive ends to create pressure on the quarterback and for Thomas to plug any holes that might be there in the running game, but look for this Cardinal Gibbons defense to still be one of the more reliable units in the state of Florida.

The Chiefs were supposed to start their season on the road against a very tough Venice squad (10-4) on August 27th. Due to COVID, the game was rescheduled to October 23. They also have games against American Heritage (Class 5A State Champions) as well as St. Thomas Aquinas (Class 7A State Champions) throughout the season, so we will get a good indicator of whether or not this Chiefs team under coach Debuc will be ready to repeat as Class 4A champions early and often.

If their offense can mature quickly, and defensive stars shine bright,  I think it’s safe to say that the sky’s the limit for this team.