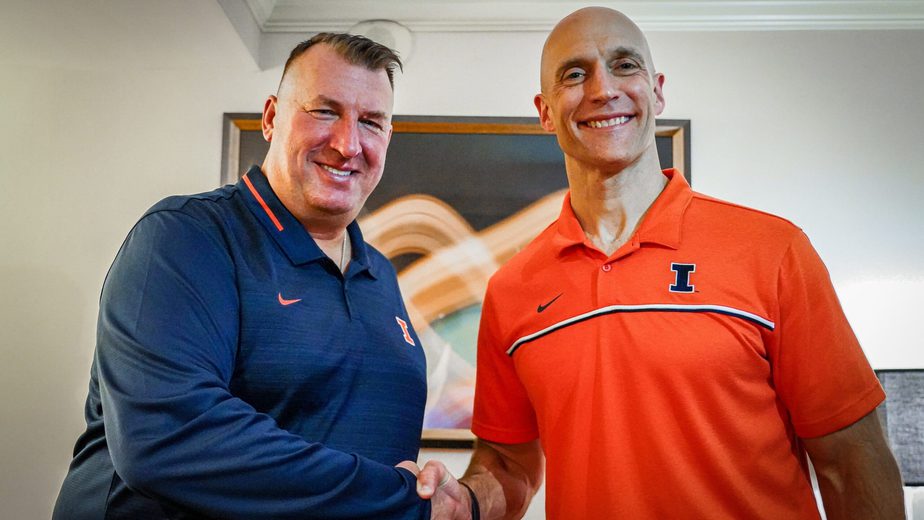 Bielema Takes Over at Illinois

After three seasons of coaching in the NFL, Bret Bielema makes his way back to his home town and the Big 10. On Saturday morning, the University of Illinois announced that they hired Bielema as their new head football coach.

Bielema made a name for himself during his seven years as the head coach at Wisconsin. In 2006, he was the Big 10 coach of the year. He had a winning percentage of .739 and won 3 Big 10 titles.

After leaving Wisconsin, he became the head coach at the University of Arkansas. Bielema didn’t have the same success in Fayetteville. Over a five year period, he had a losing record and was fired in 2017.

Bielema Regroups in the NFL

From Fayetteville, Bielema went to the NFL and was the defensive line coach for Bill Belichick and the New England Patriots. This season he was with the New York Giants as the outside linebacker coach, prior to getting the Illinois job today.

Bielema has had time to regroup the last few years in the NFL and is up for the challenge of bringing Illinois back to respectability and a potential contender in the West Division.

“I grew up in the Big 10. I was an assistant coach, coordinator, and head coach. I lived that life well in that division and am excited to get back to my home state. I was actually born in Illini Hospital. It is coming full circle for me, and I couldn’t be more excited about the opportunity,” said Bielema.

Bielema talked about what will be different in Champaign from his first two head coaching jobs. “It will still be based on the same principles of toughness and dependability. We want smart, tough, dependable players.”

“Offensively, I think this is where people will see the biggest difference. The NFL has really opened up my eyes. We will still have great offensive line play. It will be about controlling the ball and good game management,” said Bielema.

“On defense, we will go to a 3-4 scheme. This is a little different than my time in Wisconsin.”

History of the Program

In the early 1980s and 1990s, Illinois had winning seasons under former head coaches Mike White and John Mackovic. White led his team to a 10-2 record and a Rose Bowl appearance in 1983. In this era, Illinois’ football team was a significant player in the conference.

Bielema talked about the first steps he needs to take with building the program. “This opportunity is about taking Illinois to another level. We need a great assessment of where we are at and build a bridge between the current roster and our future roster. I get to see them live tonight when they play Penn State. We will start a new journey together, starting tomorrow.”

As far as recruiting goes, Bielema talked about the importance of bringing in the right players. “We are going to recruit the state of Illinois like no other. Every coach says it, but the proof will be in the pudding for our coaches. We have to get the right players on the field. It isn’t always about the 40 times or bench press. It is about how you think and act. We need players, and it all starts with recruiting.”

There have been some great coaches hired into the West Division over the last few years. Scott Frost at Nebraska, Jeff Brohm at Purdue, and PJ Fleck at Minnesota. They have all had their ups and downs and lately have struggled in this division.

Northwestern won the West Division this year, but Wisconsin and Iowa have consistently been the top 2 teams. Bielema will have his work cut out for him, and it will take a few years to get the players he needs to climb the ladder.

I think this was an excellent hire for both Bielema and Illinois. This gives Bielema another chance to lead a team in a conference and state he knows best.

As for Illinois, this isn’t a high profile Power 5 job as of right now. Illinois gets an experienced coach that has won 3 Big 10 titles and knows what it takes.

Even though his time in Arkansas wasn’t what everyone anticipated, not many have had success against Alabama, Auburn, and Texas A&M in the SEC West every year. The SEC West is hands down the toughest division in all of college football. This is his only time in his coaching career where things didn’t work, and will definitely not define him as a coach.

I think this is a great move for Illinois and believe Bielema can bring them back as a contender in the Big 10 West. As long as they are patient and give him time to upgrade his roster, he will surprise and remind everyone that he is an elite coach. He is hungry to prove people wrong and this will be his chance.

The Illini faithful hasn’t seen a winning team in decades. Bielema is the right hire as head coach and will bring life back into the program and his coaching career.