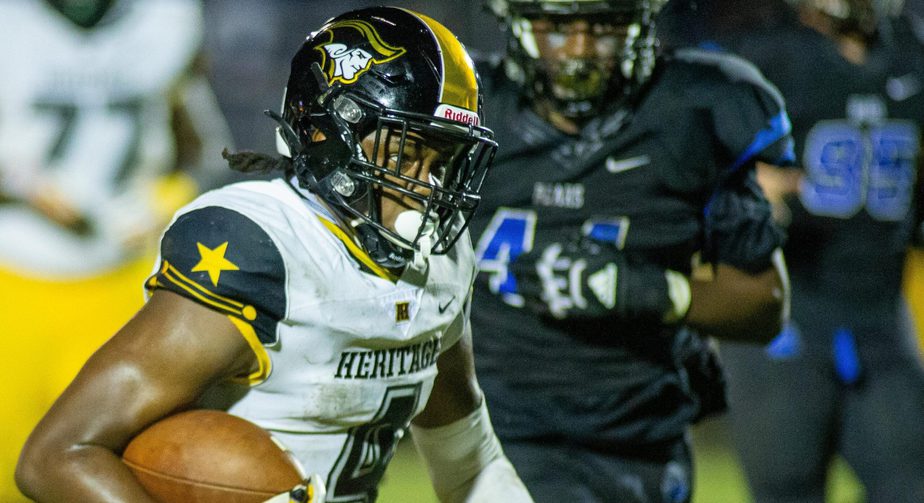 In the past 5 years, you could make the argument that the American Heritage football program has been the most dominant in the state of Florida under coach Pat Surtain Sr. Surtain, who is the father of recent Denver Broncos first-round round pick Pat Surtain Jr., has lifted this program to new heights since he took over 5 years ago, boasting a 63-6 record and winning 3 out of the last 5 Class 5A state championships.

In the 2020 season, the Patriots went 11-2, and would eventually win the Class 5A state championship over Tallahassee Rickards 24-6 for the first time since they went back-to-back in 2016 and 2017. The only losses they suffered last year were to Trinity Christian Academy (Class 3A state champions) and to St. Thomas Aquinas (Class 7A state champions). The Patriots would finish the season ranked as the 21st overall team in the nation by MaxPreps and the 5th ranked team in the state of Florida.

With the amount of talent that head coach Pat Surtain Sr. has returning there’s no reason to think that his team can’t continue the great success they’ve had and bring home another Class 5A state championship back to Plantation, Florida.

On the offensive side of the ball last year, the Patriots were a run-heavy offense. You can’t blame them when you have a 6’2, 230-pound workhorse in 2023 4-star running back Mark Fletcher, who currently holds 18 offers, most notably from schools such as Alabama, Florida, and Miami. In 2020, Fletcher had a total of 1,411 rushing yards to go along with 11 rushing touchdowns. In their state championship victory, he had 127 yards and a touchdown on 21 carries. As a whole, the American Heritage offense averaged 201.3 rushing yards a game to go along with 20 rushing touchdowns as a team. They averaged 21.5 points a game and a total of 276.6 yards per game.

In the upcoming 2021 season, look for junior quarterback Blake Murphy (5’11” 170 pounds) who has an offer from UConn to have more of a breakout role for the Patriots. Even though the 2020 season saw Murphy only have 675 passing yards with 8 passing touchdowns to go along with 323 rushing yards and 2 rushing touchdowns, he’s poised to show his worth. Often referred to by his peers and coaches as a “Kyler Murray” type player, he shows it with his elusiveness and ability to make a play out of nothing.

What will help Murphy and the passing attack will be a talented receiving core, spearheaded by Carol City transfer Santana Fleming (5’11” 170 pounds)  who is a 4-star receiver that currently holds 36 offers, including Alabama, Florida, Auburn, and Florida State. Fleming is a dynamic playmaker who can take the top off a defense. Alongside Fleming will be Jacolby Spells, (6’0” 178 pounds) a 3-star receiver with 18 offers that include Auburn, Florida, and Indiana. Even though the Patriots lost Syracuse signee Oronde Gadsden, look for this passing attack to provide a healthy balance to go along with Fletcher.

For every dominant rushing attack, there is a dominant offensive line and with American Heritage, their offensive line is led by Miguel Cedeno (6’6” 334 pounds) at tackle. He currently holds 4 offers which include West Virginia and Utah.

Don’t be surprised this upcoming fall if this Patriot offense starts to become one of the more lethal offenses in the state of Florida.

In the 2020 season, the American Heritage defense was one of the most talented in the nation. Giving up an incredible 11.2 points per game to go along with 4.3 sacks per game, this defense was the key to a championship season for the Patriots. Turnovers were a key to their success last season, with 15 interceptions (3 for touchdowns) and recovering 16 fumbles (3 for touchdowns). Look for this year’s defense to have the same type of success as before.

The biggest strength of this unit will be its defensive line, which is led by 4-star DE Marvin Jones Jr. (6’4” 242 pounds) who is just a freak of nature and an offensive tackle’s worst nightmare. In the 2020 season, Jones Jr. had 55 tackles, 11 sacks, and even a fumble recovery returned for a touchdown. Alongside Jones Jr., is Richard Thomas (6’3” 240 pounds) who is currently committed to Indiana as a DT. Thomas also had a monstrous 2020 campaign in which he had 64 tackles and 7 sacks. The most impressive part was that he had an interception returned for a touchdown in which he showed off his athletic ability that colleges drool over. To complete the 3-headed monster of this defensive line would be Belizaire Bassette II (6’2” 275 pounds) who is committed to Syracuse. Bassette had a productive season as well, with 51 tackles to go along with 6 sacks.

The linebacking core lost David Vadala (5’10” 215 pounds) who transferred to St. Thomas Aquinas, however, still boasts a strong presence on this defense. They will be led by senior  Jaeden Kinlock (5’11” 205 pounds) who is currently committed to Harvard. At the linebacker position you always want a smart player leading the way, and that they have in Kinlock, who has a 4.51 GPA. During the 2020 season, Kinlock and his genius-level ability had a fantastic year recording 111 tackles, 7 sacks, 1 interception, and a fumble recovery returned for a touchdown. On the interception, you can see Kinlock’s intelligence as he reads the wheel route and beats the running back to the spot. Kinlock was also a state qualifier in wrestling, and you can see those abilities translate to the gridiron.

For the American Heritage secondary, they lost 5-star and number one safety in the nation James Williams who signed to Miami, as well as cornerback Brian Blades who signed to Florida International. However, look for this secondary to still have an impact. They will be led by 4-star Earl Little Jr. (6’0” 175 pounds) who is one of the best cornerbacks in the nation. He currently has 40 offers which include Alabama and LSU. In the 2020 season, Little had 35 tackles to go along with 2 interceptions while missing four games due to an injury. The senior will look to lead this secondary this year to another successful season.

If their 3-headed monster of a defensive line can continue to put pressure on the quarterback while Kinlock continues to be the phenomenal leader he is at linebacker, then look for this Patriot’s defense to continue its incredible success even with a young secondary.

This 2021 American Heritage team has all pieces needed to make a return trip to the Class 5A state championship and continue its incredible success under head coach Pat Surtain Sr.. This team has the chance to be a top 10 team nationally if their offense can match their defense’s production. They will have the chance to show the nation just how good they are when they play their week one opponent IMG Academy on August 20th on the road.

If they can manage to beat the national powerhouse that IMG Academy is, then not only would a Class 5A state championship be well in reach for the Patriots, but a national title could be in the mix as well.